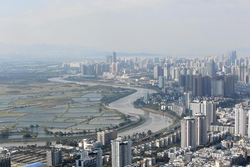 The Shenzhen River separates the high-rises of Shenzhen, China, from farmland in Hong Kong. China has come under criticism for the amount of agricultural land it has paved over in its push for economic development. (Photo: Brent Lewin / Bloomberg)

BEIJING — When Ma Wenfeng was a boy, his father earned so little money growing wheat and corn that the family mainly ate mantou, a steamed bread that is a staple of the poor. The last thing he would have dreamed of was becoming a farmer.

Now it is his greatest ambition to start a farm, but not in China, a country where the very word for "farmer," nongmin, is synonymous with "peasant." Many Chinese farmers are long past retirement age but still tilling tiny, inefficient plots of land.

Motivated by the search for big expanses of land with abundant supplies of clean water, Chinese are looking far afield — to the United States, Chile, Brazil, Russia, Ukraine, Bulgaria and Australia.

"We're the world's fastest-growing economy, with a huge demand for agricultural products," said Ma, who works as an analyst for a Beijing-based trade association, CnAgri. "When we look overseas, we see large tracts of land where you can operate a farm that makes sense economically."

From an economic standpoint, Chinese investment in farmland has impeccable logic. One oft-cited statistic is that China has 20% of the world's population and just 9% of its arable land.

"Throughout Chinese history, our land was never enough," said Tian Zhihong, a professor of international agriculture at China Agricultural University.

China suffers from chronic drought and desertification, and has compounded its problems in recent decades by polluting the land or paving it over in a headlong rush toward economic development. The Ministry of Land and Resources in December revealed the results of a five-year study (previously kept secret): 8 million acres of farmland, or roughly 2% of the country's arable land, is too polluted for farming.

From exploding watermelons to cadmium-tainted rice, both the result of excessive fertilization, domestic food scandals have made foreign-grown foods more popular in China.

"We want to bring American sunshine, land and water back to China," said Zhang Renwu, a businessman who owns two farms in Utah growing alfalfa to feed dairy cows.

Chinese companies are acquiring farmland where they can — many countries ban the sale of land to foreigners — or forming partnerships with farming enterprises overseas.

When China's largest pork producer, Shuanghui International Holdings, last year paid $4.7 billon for its U.S. counterpart, Smithfield Foods Inc., it also acquired more than 100,000 acres of farmland in Missouri, Texas and North Carolina. (Virginia-based Smithfield didn't disclose how much farmland was covered by the purchase, but just one subsidiary had reported it owned more than 100,000 acres in the three states.)

In Australia, a Chinese-led consortium acquired a sprawling 200,000-acre cotton plantation known as Cubbie Station, complete with what is said to be the largest irrigation system in the Southern Hemisphere.

Legend Holdings, the parent company of computer maker Lenovo Group, formed a subsidiary called Joyvio in 2012 to grow fruit abroad. Joyvio has invested in operations in Chile growing blueberries, kiwis and grapes and is scouting for new investments.

These investments are contentious both at home and abroad. The Chinese government is sensitive to criticism that it has allowed too much farmland to be paved over for apartments and shopping malls and that it has dragged its feet on long-overdue changes to modernize agribusiness.

Communist Party doctrine maintains that the country should provide itself with 95% of its own grain, and Mao Tse-tung preferred to let people starve in the 1960s rather than import food. Although President Xi Jinping has backed away somewhat from quotas for grain self-sufficiency, the underpinning ideology remains.

"The historic notion of food security and self-sufficiency is an incredible source of legitimacy for the Communist Party. This is, after all, a party of peasants that came to power during times of famine," said Jim Harkness, former president of the Minneapolis-based Institute for Agriculture and Trade Policy.

In a paper published in 2012, the Canada-based International Institute for Sustainable Development confirmed the existence of 54 Chinese projects overseas covering almost 12 million acres. (Land Matrix, an activist group that compiles information on the sale of farmland, found nearly double the amount of overseas land being farmed by the Chinese.)

China's farmland investments take many forms. Large state-owned enterprises are investing in plantations in Tanzania, Senegal, Sierra Leone and Zambia, among other countries, to grow corn, rice, cassava and sesame. Some products are sold locally and some are exported to China.

Smaller Chinese entrepreneurs have leased farms across the border in Russia as part of a deal with Moscow. Unlike in Africa, where the employees are local, Chinese have crossed the border into Russia as well. At least 30,000 Chinese farmers were reported to be working last year in Birobidzhan, the Siberian region carved out in the 1930s by Josef Stalin as a Jewish Autonomous Region, according to figures released during a trade fair last year in the northeastern Chinese province of Heilongjiang.

Liu Jianping, an entrepreneur from Heilongjiang, who is farming on 40,000 acres in the Russian Far East, said Russia has large tracts of arable land without enough farmers.

"The Russians have to let their lands lie idle," he said. "They need people who know how to grow crops."

But China's interest in farmland often provokes anxiety, conjuring visions of a dragon devouring the world's resources to feed its 1.3 billion people.

A furor erupted when a Hong Kong newspaper in September published a news release from a quasi-military Chinese company, saying it intended to farm up to 11,562 square miles of Ukraine, long referred to as the breadbasket of Europe.

A farm that size would account for an area as large as Belgium or Armenia.

"China 'land grab' sees it given control of 5% of Ukraine, accused of 'neo-colonialism,'" read a headline several months ago in Britain's Daily Telegraph.

The Chinese company, Xinjiang Production & Construction Corps, quickly removed the offending news release from its website, and Ukraine issued a denial. The arrangement, however, has proceeded but with a far smaller amount of land being farmed under a 50-year lease. The Chinese agreed to develop irrigation systems in exchange for favorable terms on importing crops, mostly wheat, grown on the land.

China's Africa moves have been particularly contentious, with accusations that the Chinese are exploiting the much-colonized continent.

"Zimbabwe now a full-fledged Chinese colony," read a headline in the Zimbabwe Mail in November about Chinese-owned wheat, soybean and tobacco fields on the outskirts of Harare, the capital.

Many countries prohibit foreign ownership, and in others there is strong opposition to selling land to the Chinese. So new Chinese investments are increasingly being structured as long-term leases or with promises to use China's economic muscle to build infrastructure in exchange for favorable purchase prices.

"When you say China is involved, it is like pushing a red button," said Deborah Brautigam, a professor at Johns Hopkins School of Advanced International Studies in Washington. "There is a China effect."

But China is closing the gap fast. Its direct foreign investments in the sector that includes farming (along with fishing and forestry) totaled nearly $5 billion at the end of 2012, almost double where they were two years earlier, according to Commerce Ministry data.

"It is only the last two years that the big agricultural companies are going overseas in a big way, and I think you will see much more," said Ma, the CnAgri analyst.

He believes the main issue is the inefficiency of farming in China today. According to figures compiled by his association, imported rice, corn, wheat and soybeans are all less expensive than the China-grown crops.

"Farming in China is backward. Most farmers are over 50 years old, poorly educated and trying to earn a living on 10 mu [1.65 acres] of land," said Ma, who notes that his father, nearly 70, is still farming.

He said the Chinese government should provide pensions that would allow the elderly farmers to retire so their land could be farmed more efficiently on a larger scale.

Until then, said Ma, "if you want to farm profitably, you have to go abroad."