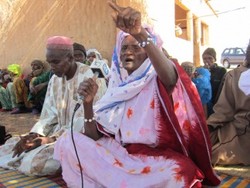 Farmers and herders from northwestern Senegal have travelled to Europe to demand the scrapping of a land deal that threatens the lives and livelihoods of some 9,000 people. A murky international conglomerate, Senhuile SA, has leased 20,000 hectares of land in the Ndiaël Reserve, land which has been used for decades by residents of some 40 villages in the area. The villagers want the project stopped, saying it will cut off their access to grazing land, water, food and firewood – ultimately forcing them off their homes and land.

Senhuile SA is a joint venture controlled by Italy's Tampieri Financial Group, Senegalese investors, and Agro Bioethanol International, a shell company registered in New York. The herders, along with representatives of the Conseil National de Concertation et de Coopération des Ruraux (CNCR) and the Senegalese non-governmental organisations ENDA Pronat and ActionAid, are in Europe from today to 6 March 2014 to mobilise citizens to call on Tampieri, Senhuile's majority shareholder, to close down the project. The project was initially established in another location, Fanaye, where violence resulting from local opposition led to the death of two villagers and dozens more injured in 2011.

A new report released today by the Oakland Institute exposes the numerous flaws with this project, including the lack of consultation with and consent from local communities, the opaque nature of Senhuile’s operations, as well as the devastating impact of the project on people’s livelihoods. Some 6,000 hectares have already been cleared and planted with different crops. The company has built irrigation canals and fences that restrict locals' access to grazing land, water and firewood. "Villagers complain of harassment, intimidation and physical assault by the police and private guards hired by the firm," said Frédéric Mousseau, Policy Director of the Oakland Institute.

According to Ardo Sow, spokesperson for Ndiaël Collective of villages resisting the Senhuile project: “The disdain for local communities is far too obvious. An Environmental and Social Impact Assessment was only conducted months after the start of the project, and was never made available to the public. Moreover, the map produced by state technicians before the start of the project identified the existence of only 6 of the 40 villages and hamlets using the land to be leased to Senhuile.”

The Ndiaël Collective, CNCR, ENDA Pronat, ActionAid Senegal, ActionAid Italy, Peuples Solidaires, Re:Common, GRAIN and The Oakland Institute are launching today an Urgent Appeal to get Tampieri to withdraw from the Senhuile project. "As concerned international organizations, we support the call of the communities for the project to be stopped and the land to be returned to the people," said Katia Roux, of Peuples Solidaires in France. "Local farmers and pastoralists need recognition and support to develop their own sustainable, small-scale food systems."

The organisations call on all concerned groups and individuals to participate in this action against this land grab in support of the Senegalese farmers and herders by sending a letter to Tampieri here: http://tinyurl.com/n3vghd5