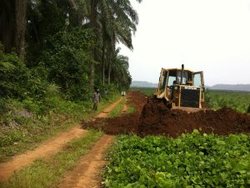 One of the main players in Greenstar Resources Ltd is Andrew Beveridge, who also established an oil palm plantation company in Sierra Leone called Goldtree Holdings. Above is a photo of a road expansion at the Goldtree plantation site.

Paragon, the AIM-listed agricultural investing company (AIM: PAR), is pleased to announce that, it has today acquired an initial 10% shareholding in Paragon Volta Limited ("PVL") and is in the process of finalising for PVL a 44 year sub lease over 5,000 hectares of irrigable land close to the River Volta in Ghana from an existing lease over a much larger farm land estate connected to the vendor (the "Investment"). This is an important strategic step in the implementation of its investment policy in African agriculture.

We are also pleased to announce that Greenstar Resources Limited ("Greenstar"), the Company's 40% owned agricultural consultancy and management business, intends to enter into a management contract with PVL to manage the development of the land and to progress early trials with a view to validating and enhancing PVL's crop plans focused on generating early revenue from its activities. Greenstar's extensive experience in West African agriculture has proved to be an important element in consummating the Investment as it will be critical in maximising the potential of the land.

This is an exciting opportunity for Paragon and is the next important step (following the previous acquisition of the shareholding in Greenstar) in the development in West Africa of what the board of directors of Paragon (the "Board") hopes will grow into a major agricultural business. Paragon hopes that this is the first step in developing a deeper relationship with PVL, alongside the acquisition of other businesses and investments as the Board implements the Company's investing strategy.

PVL has been established by Mr Vijay Thakrar, who holds the remaining 90% of the shares, to progress the significant agricultural potential of this land in Ghana.

Following Admission, the Company's enlarged issued share capital will comprise of 445,675,097 Ordinary Shares. This figure of 445,675,097 Ordinary Shares may be used by shareholders in the Company as the denominator for the calculations by which they will determine if they are required to notify their interest in, or a change in their interest in, the share capital of the Company under the FCA's Disclosure and Transparency Rules.

Following the issue of the New Ordinary Shares, the Company is aware of the following Significant Shareholders:

Simon Hunt, Executive Chairman of Paragon, said "I am delighted that we have taken this initial step in our long term relationship with PVL in Ghana, where we see enormous potential to develop a strong operation in a country which is very supportive of agricultural investment and development"

This information is provided by RNS

The company news service from the London Stock Exchange