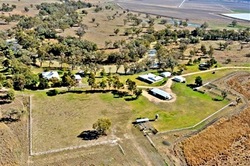 Chinese buyers are in negotiations to buy Undarbi, a well-known south-west Queensland cropping property of 11,935 ha for more than $36 million. The propoerty also carries 11,250 megalitres of water licences.

CHINESE buyers are in negotiations to buy another well-known south-west Queensland cropping property for more than $36 million.

Undabri, formerly owned by real estate and agricultural land identity Craig Doyle, was placed on the market after Mr Doyle had several of his companies placed into receivership last year because of high debts and damaging floods. The 11,935-hectare property 30 kilometres north of Goondiwindi has been on and off the market with expectations of around $50 million.

The potential new owner has been dealing with receivers Deloitte and could soon join the growing list of Chinese buyers who have snapped up cheap agricultural land in Australia. Unconfirmed reports surfaced that Zhejiang RIFA Holding Group, one of China's biggest textile makers, purchased several wool producing properties in Victoria's Western District.

Deloitte receivers declined to comment on the sensitive negotiations with the Chinese investors.

Last year, the neighbouring property Mobandilla was purchased for about $12 million. A collapsed managed investment scheme and very high debt saw that 5400-hectare cotton property also fall into the hands of receivers.

Elders Queensland state manager John Burke and Clayton Smith are marketing Undabri but declined to comment on the progress of the transaction.

Deloitte receivers were appointed by National Australia Bank, which is the mortgagee of the freehold property. The property has a livestock carrying capacity of 3000 head of cattle and there is potential for a 10,000 head feedlot.

Any sale to Chinese investors would not require Foreign Investment Review Board approval as it falls below the threshold of $248 million.