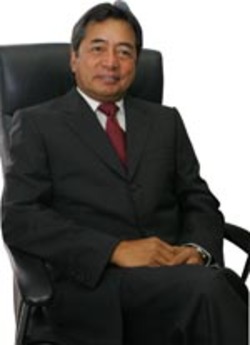 Anuar Adam's company Tadmax has acquired 80,000 ha of forested lands in Papua, Indonesia, near the Papua New Guinea border, which it intends to log and then convert to oil palm plantations. Tadmax paid US$80 million for the land by buying up two companies with rights over the lands-- Suffolk Pte Ltd (owned by Adwir Boy) and Wealthgagte Pte Ltd (owned by Hafiz Arief). Tadmax now expects to sell the lands for as much as US$200 million.


PETALING JAYA: Felda Global Ventures Holdings Bhd (FGV) has denied being in discussions with Tadmax Resources Bhd over the sale of the latter’s land in Indonesia.

“However, the company previously in 2013, had very preliminary exploratory discussions with Tadmax on this matter but no definitive terms were discussed, negotiated and agreed upon,” it said in its filing with Bursa Malaysia yesterday.

FGV was responding to an article published by an English daily on Thursday that said it was involved in a land disposal exercise by Tadmax, that could be worth as much as RM1bil.

The article said that FGV was seen as the front-runner for ownership of the land. It added that Tadmax would also be involved in the felling of trees in the virgin land as well as in replantation efforts.

Tadmax had issued a statement to Bursa on Thursday that it was in preliminary discussions with various parties, including FGV to sell its holdings in Indonesia.

“No definitive terms have been discussed with any party to date and discussions have been generally exploratory,” it had said referring to the article.

Formerly known as Wijaya Baru Global Bhd, Tadmax reportedly owns 80,000ha in Irian Jaya, Indonesia, which is suitable for rubber, sugar cane and oil palm plantations. It also has a felling licence from the Indonesian government to cut down trees in the concession area.

The daily reported that Tadmax would first extract timber from the forested land before converting it into an oil palm plantation. It also stated that K&N Kenanga Holdings Bhd was believed to be advising Tadmax on the deal.

“The company also further wishes to state that it has not appointed any investment banker for the purpose. As such the company wishes to inform that there is no basis for the contents of the aforesaid article,” Tadmax said in its filing on Thursday.

According to the article, Tadmax bought the land for US$80mil (RM264mil) and could probably sell it for as much as US$200mil with the right buyer. Also, it was mentioned that other parties including Tan Sri Ling Chiong Ho, who controls Sarawak Palm Oils Bhd, and Rimbunan Hijau’s Tan Sri Tiong Hiew King, had showed interest in the land.


K&N KENANGA Holdings Bhd, the country's largest independent investment bank by equity trading value and volume, is believed to be advising Tadmax Bhd over a land disposal exercise that could rake in as much as RM1 billion in cash, bankers familiar with the matter said yesterday.

Business Times was told that a special team headed by the investment bank's chief Roslan Tik structured the deal, whereby Tadmax will not only gain from the sale of the land, but will also be involved in the felling of trees in the virgin land as well as in replantation efforts.

It is further understood that a sale of the land could be much nearer than earlier anticipated, with Felda Global Ventures Bhd, the world's third largest oil palm plantation operator, seen as the front-runner to gain ownership of the land.

Felda has 343,521 hectares of land in Malaysia, and 56,385ha in Indonesia. The company is understood to be studying the implication of purchasing the Tadmax land. Felda is especially concerned if will run foul over Indonesia's 100,000ha land ownership cap by foreign companies.

Datuk Major (Rtd) Anuar Adam had taken control of Tadmax (formerly known as Wijaya Baru Global Bhd) in 2011 from timber tycoon Datuk Seri Tiong King Sing. He bought the Sarawakian's 32 per cent stake in the company for 95 sen a share.

When Anuar took control of Tadmax, many had felt that the company's best years were under the bridge, but the former soldier was adamant that Tadmax was sitting on a gold mine. Anuar's "goldmine" is the 80,000ha in Irian Jaya, which is suitable to cultivate rubber, sugar cane and palm oil.

Wijaya also has a felling licence from the Indonesian government to cut down trees in the concession area and will first extract timber from the forested land, before converting the area into oil palm plantation.

Tadman, which bought the land for US$80 million (RM264 million), could probably sell it for as much as US$200 million to the right buyer.

Since 2012, many big names have been linked to the land. Among those said to be interested in the land were Tan Sri Ling Chiong Ho, who controls Sarawak Palm Oils Bhd, and Rimbunan Hijau's Tan Sri Tiong Hiew King, who, according to Forbes Magazine, has a net value of US$1.8 billion.