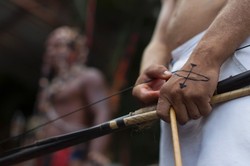 Amazon Indians stand in front of the headquarters of Brazil's Indian affairs bureau FUNAI after police expelled by court order a group of Indians who were occupying the building, in Manaus, Brazil, on January 29, 2014. (Photo: Reuters/Bruno Kelly)

LONDON (Thomson Reuters Foundation) – Progress toward securing the land rights of forest communities has slowed around the world, with some hard-won gains threatening to be rolled back in some countries even as others see advances, forest experts said this week.

In Indonesia, for instance, the country’s constitutional court last year annulled an effort by the government to claim ownership of traditionally indigenous-controlled forests, and the president promised to put the ruling into practice, changes seen as important victories.

But in Brazil, the growing political clout of big soybean farmers means pressure is growing to weaken protections for indigenous reserves in the Amazon forest and to allow some forest land to be used for agriculture, said Raul Silva Telles do Valle, policy and rights coordinator at Brazil’s Instituto Socioambiental.

A growing number of private corporations that source some of their products from forests – including giants such as Unilever, Wilmar and Nestle – have pledged to support land rights for indigenous communities as part of sustainability initiatives, a promising advance, said experts at a panel discussion on community forest rights in London this week.

But so far, the experts said, few of those promises have resulted in more protected community forest land.

“We applaud every court ruling, corporate announcement and government press conference acknowledging the rights of people to the lands on which they live,” said Andy White, coordinator of the Rights and Resources Initiative (RRI), a coalition of 140 organisations working on forest tenure and market reforms.

“But communities have grown tired of waiting for these fine words to become law, and for those laws to be implemented. Progress is measured by actions and accomplishments on the ground, not by words alone,” he said in a statement.

Around the world, community forests cover 513 million hectares, an area one and a half times the size of India, RRI said. But much of the protected land is in Latin America, where communities own 39 percent of forests.

In sub-Saharan Africa, where forests are coming under increasing development pressure, by contrast just six percent of forests are under community control – and none are community owned, RRI said. Asia falls somewhere in the middle, with community forest tenure recognised in law in many countries, but few forests actually in community hands.

Between 2002 and 2013, the amount of forest land under community ownership in low and middle income countries rose from 21 percent to over 30 percent an RRI annual review found.

But the rate of progress has slowed, particularly since 2008, with fewer and weaker land tenure reforms passing, White said.

And in 2013, “the overriding picture … remained one of continuing resource grabs by local elites and corporations, aided by governments eager to give away land to investors on almost any terms,” the RRI review noted.

Why does community ownership of forests matter? A range of studies suggest that forest communities, which depend on forests for their livelihoods, are among the most effective protectors of forested land because protecting the health of the forest is in the community’s interest.

The REDD+ initiative, designed to “reduce emissions from deforestation and forest degradation,” aims to support that by paying forest communities and governments to protect standing forests, while richer nations who pay for the protection earn carbon credits for it.

Brazil has so far received a large share of a promised billion dollars by 2015 from Norway in support of forest protection, including REDD+, Silva said. But the problem is that “this is very small compared to (profits from) agro exports from Brazil, which means that pressure to cut forests for agricultural expansion is still growing, he said.

“Today REDD+ is not working in Brazil,” he said. “We need it. It’s the way to we have to go. But the economics are very hard.”

Jenny Springer, director of global programs for the Rights and Resources Initiative, agreed that REDD+ now needed to move beyond planning and “prioritize real investment and direct support to tenure reforms or it will fail.”

The biggest driver of deforestation today, the forest experts said, is no longer illegal logging but expansion of agriculture into forest land to meet growing world demand for food, biofuel and other agricultural products.

Such expansion is bringing huge new threats for forest communities, among them “land grabs” by governments and companies hoping to profit from new access to agricultural land, the experts said.

A share of big agribusiness companies, such as Nestle and Coca-Cola, have recently pledged to respect the land rights of indigenous communities, including forest communities, and to make sure their suppliers do the same. But previous commitments have not always had much effect, the experts warned.

“We’re not very optimistic” that the private sector will be part of the solution for protecting forest land,” said Megan MacInnes, a land campaigner for Global Witness, a London-based organisation which works on conflict and corruption issues around natural resources. “What we really want to see in 2014 is a progression from words to actions.”

If companies are serious about protecting the land rights of communities, they need to make sure their new promises apply to land deals already signed as well as new ones, she said. They also need to prove what they are doing through public reporting and scale up what is working.

As well, they need to take part in talks underway on setting up principles for responsible agricultural investment. So far, “large players are very much absent from that,” MacInnes said.

She and Duncan Pollard, who works on sustainability issues for Nestle, said that as agricultural land expansion and forest protection issues become increasingly intertwined, it will be useful to look at protections for forest communities and other land communities with insecure tenure together.

“You need to look at land rights more broadly… to make sense for companies,” Pollard said. He added that Nestle was aware that if it wanted its farmers to grow coffee and cocoa sustainably, “one of the elements of that is they have secure tenure of land.”

How might companies be encouraged to act on their commitments, and other foot-dragging companies encouraged to sign on? The experts suggested that banks should ensure loans for agricultural projects are contingent on borrowers  proving  that they are meeting standards on treatment of indigenous communities, including supporting their land tenure.

MacInnes of Global Witness said voluntary commitments to protect community land tenure were unlikely to be successful enough, and that regulations are “what’s missing.”

“Certification and roundtables have done the job in some areas. But that they haven’t been able to stop land grabbing in the areas where they operate is indicative that regulation is needed,” she said.

Even in Indonesia, which saw an important court decision in support of community forest rights last year, progress is far from certain. The new ruling has yet to be implemented on the ground, said Abdon Nababan, secretary general of the Indigenous Peoples’ Alliance of Indonesia’s Archipelago, who called for “rules to make it work.”

Forest communities, afraid that state governments may try to claim community forests that are not officially marked and recorded, have launched a major campaign to demarcate forests, with the aim of getting their borders put on national maps, he said.

But uncertainty remains, he said, and “our enemy - all of us - is uncertainty.”