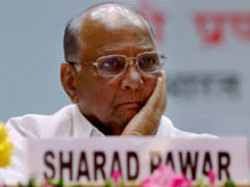 "Agriculture land in Asia is under pressure ... there is an opportunity for responsible investment in agriculture by Asian countries in Africa," says India's Agriculture Minister Sharad Pawar.

Having an advantage of 733 million hectare of arable land, which accounts for 27.4% of the total arable land in the world

Asian countries including India should invest in Africa's agriculture sector as it lags in farm output despite large arable land for cultivation.

Currently, China leads in farm investment in Africa. Individual farmers from Punjab and private companies like Karturi Global from India have also made small investment in the African continent.

"Agriculture land in Asia is under pressure from increasing population and urbanisation. As such, there is an opportunity for responsible investment in agriculture by Asian countries in Africa," Agriculture Minister Sharad Pawar said at the Asia-Africa Agribusiness forum organised by Ficci.

Farm investments in Africa should be as per the norms laid down by the UN body Food and Agriculture Organisation, he added.

Pawar further said: "India is very clear that while investment in Africa must lead to agricultural growth, diversification and employment, it must not be at the loss of domestic food security."

Highlighting the scope for agri-investment in Africa, he said it has competitive advantage of 733 million hectare of arable land, which accounts for 27.4% of the total arable land in the world.

"Currently, only 183 million hectares is under cultivation in sub-Saharan Africa and approximately 452 million hectare is still remain uncultivated." he said, adding that Africa's weak performance in agriculture is a barrier for development of agribusiness sector.

He added that with responsible investment, Asia, which has made remarkable progress in raising food production, can help improve Africa's agriculture sector by replicating the farm technologies and high yielding varieties.

Asia, with 2.2 billion people directly or indirectly dependent on agriculture, has improved farm output largely on account of introduction of high yielding varieties for cereals, better irrigation, fertilisers, besides credit support, he added.

At present, Africa's agriculture sector contributes around 32% to the total GDP despite 65% of labour force employed in farming. Its farm productivity lags behind other continents and dependent on imports to meet shortages.