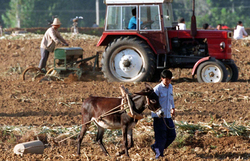 Growing numbers of Chinese businesses are engaging in overseas agricultural operations, In Zhejiang province alone, 500,000 businesses have, over 3.5 years, cultivated 3 million acres of land in more than 40 countries, according to Chinese news portal Gemag.

The practice mimics Japanese government policy, which has been urging Japanese agricultural businesses to make direct investments or acquisitions in farming operations in ag-dependent countries. The move insulates the island nation by controlling part of the global food supply chain. The country's total acreage abroad now triples its domestic share.

Chinese farming businesses, though, are facing multiple challenges in their overseas push. Political turmoil in developing countries barricades their sprawling plots of land available for lease. Business contracts in those countries often lack legal binding power and are subject to political whim, including the not-unlikely regime change, said the report.

Song Tingming, vice chairman of the China National Association of Grain Sector, noted that the golden opportunity for Chinese businesses to engage in overseas farming has passed.

Beidahuang Group, based in northeast China's Heilongjiang province, is facing restrictions on a massive land acquisition by foreign enterprises in Argentina. The restraints came shortly after it publicized its plan in Dec. 2012 to invest US$1.5 billion for cultivating 300,000 hectares of farmland for 20 years in the country.

Another difficulty is a lack of substantial government support for overseas agricultural investments, which are often denied government incentives available for domestic agricultural projects. In contrast, 21.75 billion yuan (US$3.6 billion) in subsidies for the purchase of agricultural machines by domestic farmers has been earmarked by China's Ministry of Agriculture.

Agricultural enterprises often have difficulties repatriating the profits from overseas operations back to China, due to forex control in many developing countries. Crops do not always make the return passage since they rely on the mediation of enterprises with an import license for grains, such as China National Cereals and Oils and Foodstuffs Corp. (COFCO). Sometimes the only option is to sell them on the international market, said the report.

Overseas Chinese agricultural operations are scaling back now that the country has over 1,000 overseas companies, compared to Japan's 100. The smaller number, however, is offset by a yield ratio and farmland space which triples that of China.