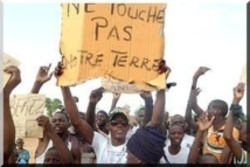 Youths leadeing a 14 Mai 2013 protest on lands  in Boghé ceded to the dairy company Tiviski.

In a letter addressed to President Mohamed Ould Abdel Aziz Sunday, the population, supported by a group of NGOs working under the Network of Civil Society Organizations for Food Security (ROSA), said the lease infringes on the pastoral code and will stifle human and animal life in the region.

"We want this project to be simply cancelled because of the threats that it poses to the present and future generations of our community," they emphasized.

The Mauritanian government leased the land to the Saudis on 16 January, 2014.

Following their agreement with the government, the Saudi society will invest US$ 1 billion in an aquaculture project in the valley of river Senegal.

In Africa, communities, NGOs and other relevant bodies have regularly denounced land concessions to foreign multinationals, saying that the measure was nothing short of land grabbing which, they say, endangers food security of the local communities.