Senhuile-Senéthanol: Farmers determined to oppose it 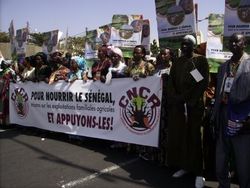 1401 Senhuile-Senéthanol: Farmers determined to oppose it

An agro-industry project jointly financed by capital from Italy, the US and Senegal has aroused resistance from the rural communities living of Gnith in Senegal. The people are opposed to the current development of land that is part of the project. The Italo-Senegalese company acquires vast tracts of land to produce biofuels for the European market.

Before establishing itself in Gnith, the company had been set up in Fanaye where the local people resisted the project. Confrontations between the protagonists of Senhuile-Senéthanol and the project’s opponents resulted in two deaths and dozens of injuries. This led the project sponsors to suspend activities in 2011. Currently, the people of Gnith, and in particular the Fulani herders, are being faced down by the firm’s bulldozers. The project has disappointed farmers as land development has ​​reduced the grazing areas available for breeders. The project was also supposed to create employment, provide a health centre and grant subsidies to the local community, but none of these promises have been kept.

As well as provoking the opposition of the local community, the presence of the Senhuile-Senéthanol plantations has already cost the lives of three children who drowned in irrigation canals dug by the company.

Despite confrontations with law and order forces, arrests and prosecutions, the resistance has not weakened.  The residents of 37 villages that have been affected by the firm’s activities are now  unanimously rejecting the project. For them, resistance is the only option because the project is reducing their stock breeding activities, the main source of income in this part of Senegal. They say that Senhuile-Senéthanol is “taking the bread out of their mouths."