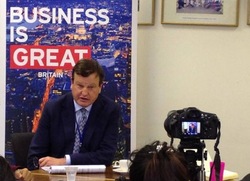 RANGOON — A business ambassador for Britain has warned that uncertainty over land ownership in Burma could limit investment in agriculture, as the Southeast Asian nation looks to expand the sector.

The United Kingdom’s business ambassador for agriculture, James Townshend, completed a six-day visit to Burma on Saturday, during which he met with Burmese government officials and toured agricultural projects in the country.

He told reporters during a press conference at the British Embassy on Thursday that while agriculture was already making a large contribution to Burma’s economy, there was “huge potential” for expansion.

“Of course there are all sorts of problems that have to be dealt with, but the underlying fundamentals, I would suggest, are extremely positive.”

With most of the West’s economic sanctions dropped or suspended, Burma is hoping to boost overseas investment in its underproductive agricultural sector. Agricultural investments have made up only 0.43 percent of foreign direct investment since 1988, according to the latest Directorate of Investment and Company Administration figures.

One difficulty the country will face as it tries to boost that figure is likely to be land tenure. During decades of military rule—which officially ended when the nominally civilian government of President Thein Sein took power in 2011—hundreds of thousands of acres of farmland were forcibly seized by the government and the armed forces, often to be handed to companies with close ties to the junta.

As a result, the past few years has seen rising complaints over land confiscation, and demands that land is returned to its rightful owners. Earlier this month, about 500 farmers from across the country demonstrated in Rangoon, calling for the return of seized lands.

Townshend—who is the chief executive of large-scale agriculture firm Velcourt Group—said uncertainty over land ownership, and the potential for land grabs, would be of particular concern in “land-intensive” agricultural projects.

“Myanmar isn’t alone in terms of the issues that arise, but it’s one that clearly needs to be thought through,” he said. “In my judgment, until such time as it is thought through, and there is real visibility on who owns, or has title to, or has legal right to occupy [land], there’s going to be an impediment in the way of the industry.”

Many people in Burma are living or farming on land to which they have no title, meaning they face eviction if the government decides the land should be used for something.

Townshend warned that the lack of secure tenure could inhibit agricultural development, as well as making for a difficult environment to investors.

“If they’ve got no security, [the current occupiers of land] can’t sensibly make the investment needed to deliver a competitive agricultural sector,” he said. “I would have thought it would be unwise to contemplate disenfranchising the people who occupy the land at the present time. That would be a fairly dangerous route to go down.”

Lisa Weedon, director of the UK Trade and Investment office at the British Embassy in Rangoon, agreed that land-intensive agriculture was a “very difficult sector to invest in at this stage.”

“If we had a British business who was looking at land-intensive agriculture, we would have to offer them lots of advice and support on how to negotiate that,” she said.

Townshend highlighted the possibilities for British companies to export to Burma technology and training, as well as commodities, including the semen of livestock—for which Britain recently signed a US$74 million-a-year deal with China.

Townshend’s visit included a trip to a joint venture project in Pathein, Irrawaddy Division, between Burmese conglomerate Yoma and Britain’s ED&F Man, which aims to produce export-quality coffee in the Irrawaddy Delta.

The visit also involved a meeting with Vicky Bowman, director of the Myanmar Center for Responsible Business. Bowman said the government was making “steps forward” in dealing with the land ownership issue, including introducing new laws on agriculture and a land registration program.

“But there is no comprehensive land-use policy yet in place,” she told The Irrawaddy by email.

“What’s needed is an inclusive and transparent consultative process to develop a land policy, involving civil society, farmers, private sector companies (including from other sectors using land, such as forestry, mining and tourism) and other stakeholders. This needs to balance interests concerning national food security, economic development and human rights.”

Bowman also said there was a lack of transparency around the government’s granting of land concessions to companies for development, and how the existing tenants of land taken over by firms are dealt with.

“If Myanmar starts to implement a consistent and transparent Environmental and Social Impact Assessment process, as foreseen under the Environment Law and the Foreign Investment Law, this should help identify where displacement [of people] is occurring and provide a mechanism for ensuring that it is in line with international safeguards standards. But we are still a long way away from that,” she said.