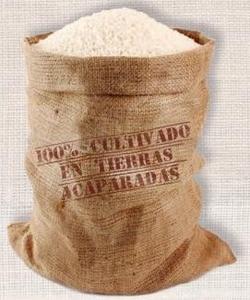 Above 600 people driven from their land without any compensation, increased cases of malnutrition and malaria, expulsion of women rice lands ... these are some of the impacts of the investment company Agrogeba Spanish rice producing region Bafatà, Guinea-Bissau, a country where hunger is a chronic problem and 2/3 of the population lives below the poverty line.

The report "Mark Spain: Spanish investments that generate poverty"  reality shows in which the communities of northern Guinea-Bissau which has robbed the land they cultivated and they got rice, the mainstay for the 90% Household.

Although the Spanish investment company Agrogeba raised in order to supply the local rice market in a country that depends on imports for supplies of this commodity for household food (Guinea Bissau go to the international market to buy nearly 72% of the rice consumed in the country), the reality has been quite different ...

The report concludes that acquiring Agrogeba several farms in the communities of Sara Djae, Sintcham Campampe and Loba is a clear case of land grabbing, according to the Declaration of Tirana and is a clear violation of human rights (inter alia, Article 25 on the right to a dignified life and food or Article 17 on private property rights and collective). Furthermore, the agreement between the company and the State of Agrogeba Guinea-Bissau also violates at least 13 of the 52 articles of the Land Law. It also makes clear that there has been any process of consultation with affected communities and that the Government of Guinea-Bissau had knowledge that the land was owned by the communities.

Neither has produced a study on the social and environmental impacts of investment Agrogeba, This implies that more than 600 people are no longer able to cultivate their land with especially harmful impact on women, who were working in the rice fields. It also affects people who practiced livestock.

The investment has caused Agrogeba increased cases of malnutrition (increased vulnerability before illness and lower productivity at work) and significant increase in cases of malaria by the effects of the spraying of pesticides by the Spanish company.