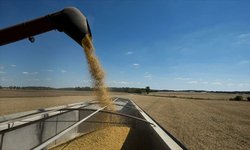 A combine unloads a hopper full of harvested soybeans into a tractor trailer on a farm in Fairfield County, Ohio, US, on September 28, 2013. Photo: CFP

"Chinese, American farmer." This was how Zhang Renwu introduced himself at a recent meeting on new agricultural industrialization in Beijing.

In the past three years, he has purchased two farms in Utah, the US, for growing alfalfa, a major forage for dairy cattle, and become the largest alfalfa supplier in China.

"Although I also have farms in Inner Mongolia, it's not economically viable to grow alfalfa in China," Zhang told China Newsweek.

After observing the potential demand for alfalfa in China, Zhang stepped up his overseas expansion. Lately, he has been busy working on the purchase of a third farm in Utah, whose area doubles the previous ones, and is getting closer to his ambition of bringing solar, land and water resources to China.

Zhang is not alone in seeking farms abroad. Liu Chuanzhi, the founder of Lenovo and chairman of Legend Holdings, made a 12-day tour in late November and early December of Chile, observing orchards and talking with the local farmers. In the past five years, Joyvio, a first-tier subsidiary of Legend Holdings, has purchased five farms in the southern hemisphere, sourcing blueberries, kiwi fruit, walnuts and grapes for Chinese consumers.

In September 2013, Xinjiang Production and Construction Corps reportedly signed a contract with Ukrainian agricultural firm KSG Agro to rent an area of 100,000 hectares to grow crops and raise pigs.

The Chinese agricultural sector has embraced an unprecedented wave of going global.

The Ministry of Commerce said China imported 72 million tons of grain in 2012. Ma Wenfeng, an analyst at Beijing Orient Agribusiness Consultants, estimated that the number could have reached 80 million tons last year, suggesting the country only produced 88 percent of the grain it needed.

The figures showed that grain self-sufficiency in China stayed at 100.5 percent in the mid-1990s and the years after. In 2004, China was a net grain exporter. But since 2011, it has become the world's largest agri-product importer.

The plunge in self-sufficiency is also what concerns Zhang Hongyu most. "Even though we made a breakthrough in grain yields last year, it failed to relieve the difficulty of balancing the grain aggregate and structure," lamented Zhang, director of the industrial policy and regulation department at the Ministry of Agriculture.

The challenge will grow with the increasing population as the family-planning policy is relaxed. Many blame the crisis on rapid urbanization, limited farmland and low productivity.

Chinese entrepreneurs are going global ahead of officials. Countries with developed agriculture such as the US, Australia, Chile and Argentina have become their prime destinations. They share common characteristics of having vast territories with sparse populations and fertile soil.

"The natural conditions are excellent in the central production area of Chile. The north is desert, the east is the Andes, and the west is the Pacific. All sides are natural protective screens and there are few plant diseases and insect pests, which means much less pesticide is used," said Liu Dan, vice president of Joyvio.

Joyvio has also reached deals in Australia. By establishing a strategic partnership with Perfection Fresh, a leading fruit and vegetable producer in Australia, the company brings back grapes, cherries, oranges, mangoes and other fruits.

Liu Dan revealed that the recent tour led by Liu Chuanzhi in Chile could result in the signing of another land purchase agreement in the country.

As early as in 2011, Beidahuang Group, a large farming company based in Heilongjiang Province, reached a deal with authorities in southern Argentina's Rio Negro, investing $1.5 billion to develop 300,000 hectares of unused land to grow corn, soybean and vegetables in the next 20 years.

The high efficiency in those countries is also a major attraction.

After the melamine-contaminated formula powder scandal in China, Zhang Renwu started to ponder ways to procure higher-quality forage for cows. An inspection tour of Utah in 2008 led to a surprising discovery.

Both alfalfa's purchasing price and land transfer price are cheaper than domestic ones. He also found that the 8,900-hectare Escalante Ranch farm, which he purchased in 2011, only had four employees. A farm of the same size in China would need 200 to 300 workers.

Agricultural modernization in the US was beyond what Zhang had imagined. In China, even at different planting areas on one huge farm, farmers would use the same fertilizers. But in Utah, companies will sample and test soil ingredients in different regions, and then decide on the fertilizer types and quantities.

Liu Dan from Joyvio was also impressed by modernization in Chile. The major grape production area in the country is covered by GPS and meteorological towers. By regularly monitoring changes in light and temperature, as well as sample testing the soil's humidity, farmers will scientifically control the fertilization and irrigation.

As incomes rise and a middle class emerges, people have set higher standards for food safety and diversity. "China has 100 million affluent people. They drive fancy cars, live in luxury houses and carry LV bags. But what they eat is junk food," Li Zhongzhi said, adding that food whose safety and quality can be guaranteed can sell well even at five times the price.

IT icon Liu Chuanzhi has also seen the potential in the market. "People in China in the past thought fast food was good food. You can see a gap in the development of the US and China, but now China has a growing middle class and they are trying to not have these habits and live healthier lives," Liu said in a recent interview with Chilean website freshfruitportal.com.

Generally speaking, B2C has much higher requirements in terms of logistics. But at present, the entire chain of land purchase, planting, transportation and distribution is yet to be smoothed out. In terms of global resource allocation ability, China is lagging behind.

Japan has been establishing farms in Southeast Asia since the 1940s. In the 1980s, it expanded land exploitation to China. Currently, it has contracts with farms growing fodder crops in many countries such as Brazil, Argentina, Russia, Ukraine, China, Indonesia New Zealand and the US. The land involved totals 12 million hectares, nearly three times its own territory.

And now that farm extension overseas is increasing, many countries have tightened restrictions on land purchase by foreigners in recent years.

In 2011, Brazil issued a new policy stipulating that land purchase by foreigners surpassing 100 hectares had to be approved by parliament. Previously, the limit was 5,000 hectares. The new policy also said that foreigners were only allowed to buy a maximum of 25 percent of a township's total arable land.

In the US, some states prohibit foreign purchases altogether. Some require purchasers to live there for at least two years, have a stable income and good credit records.

Ensuring grain self-sufficiency and maintaining "moderate imports" will be a basic policy, according to China's No.1 Central Document.

"Too many grain imports will bring severe economic and political risks," Ren Zhengxiao, director of the State Administration of Grain said at a recent meeting, noting that domestic grain prices would be affected and farmers' incentives undermined if incomes are reduced.

At a recent conference, hybrid rice inventor Yuan Longping remarked that the only way out was to increase the yield per unit area through technological advances.

He criticized seed agents for driving up prices and blocking the planting of high-yield hybrid rice. According to Yuan, only 57 percent of the country's total rice-planted area grows hybrid rice.