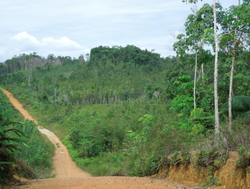 Palm oil companies have long been criticised for their damaging clearance, of both forests and peatlands, which contributes significantly to global warming.

It is estimated that Indonesia, where forest clearance is still increasing despite Presidential promises to halt it, is the world's third highest emitter of green house gases. This is mainly due to large scale land clearance for palm oil plantations, pulp and paper ventures and transmigration.

Given the ineffectiveness of Government efforts, getting companies to set aside forest and peatland areas within their concessions seems like a sensible way to limit the problem.

But - given that most concessions are handed out by governments without first recognising and securing the lands of local communities - what are the implications of these set-asides for the rights and livelihoods of forest peoples?

A new report from the Forest Peoples Programme and Transformasi untuk Keadilan-Indonesia (TUK-I) explores how one of Indonesia's largest palm oil companies, Golden Agri Resources (GAR), is addressing this challenge.

In 2010, in response to a targeted campaign by Greenpeace, GAR adopted a Forest Conservation Policy which it is piloting in its subsidiary PT Kartika Prima Cipta (PT KPC) in Kapuas Hulu District, West Kalimantan, an upland area famous for its large lakes, extensive peat swamps and productive inland fisheries.

What we found was an ongoing land grab

We carried out two detailed field surveys in the area and interviewed the affected communities in the PT KPC concession and talked extensively with GAR and PT KPC staff, as well as the various NGOs and consultancies involved, which are advising GAR.

We assessed the company's performance, as scrupulously as possible, against the standards of the Roundtable on Sustainable Palm Oil (RSPO), of which GAR is a member, and against GAR's own social and environmental policy.

We were really shocked by what we found in the field. Far from being a model project which reconciled community rights and forest conservation efforts with palm oil plantations, what we found was an ongoing land grab.

The set aside scheme, now being imposed for 'high conservation values' and 'high carbon stocks', is further limiting community rights and livelihoods.

Local people cut out of the process

Although the company began operations in 2007, as of October 2013, it had yet to complete its RSPO-required High Conservation Value Assessment.

The company omitted land tenure studies or participatory mapping of customary lands. Communities were not free to choose their own representative institutions.

Nugatory compensation was paid to community members while getting them to permanently surrender their lands, through an unclear process which gave them the false impression that they could get their lands back after 30 years.

Not a single one of the hundreds of farmers who unwittingly sold their lands to PT KPC has a copy of the contract.

Some communities refused to surrender their lands but, ignoring the RSPO requirement that communities have the right to say ‘no', they have come under sustained pressure from the company to relinquish their lands anyway.

No discussions were held with the communities to help them decide how much of their lands should be set aside for their own livelihoods, instead they were assured that oil palm smallholdings and new jobs would bring them major benefits.

In fact, most of the jobs are very low paid and the smallholdings, which are run by the company, have come late, are about half as extensive as expected and come encumbered with debts and overheads that had not been adequately explained.

Although not all community members are against oil palm and some do see real benefits, the imposition of the scheme has caused major rifts in almost all the communities.

Ever since 2007 when the concession was first announced, there have been protests and demonstrations against these perceived injustices and these have continued right up to 2013. The company has paid the police to disperse protesters.

In short, the findings point to major failures of compliance by PT KPC and GAR with the RSPO's 'Principles and Criteria'.

As for the proposed set asides of High Carbon Stocks in line with GAR's new Forest Conservation Policy, these are deeply unpopular both with those communities refusing the company's presence and with those that have pinned their hopes on oil palm.

The imposed categorisation of forested lands according to their carbon stocks ignores the peoples' own systems of land use, land ownership and land classification and thus limits their livelihoods and options for income generation.

These shortcomings were reported to GAR in July 2013 but both the company and the consultancies supporting it have been very slow to take remedial action on the ground.

Land conflicts and other grievances - a resolution?

However, while this report was being completed, the company and consultancies have initiated a programme aimed at resolving the land conflicts and dealing with the other grievances.

Other circumstances also provide hope that things can be improved. The company has openly committed itself to making improvements and has shown goodwill at international, national and local levels. It has shown it is open to dialogue and taking advice, even from its critics.

The HCV Assessment has now been completed - though it has yet to be shared and explored with the communities. Where the communities have strongly resisted the take-over of their lands, the company has not taken lands by force and it has now made a verbal commitment to stop seeking to get these communities to surrender their lands.

The company has also stopped clearing forests and peatlands and HCV areas. This is hopeful and we shall now be monitoring to ensure these promises become reality on the ground.

Our report concludes with a detailed set of recommendations of what needs to be done to bring the operation back into compliance with the RSPO standard. We also suggest some first steps on how the Forest Conservation Policy can be reconciled with community rights, needs and livelihoods, which need to be explored with the communities.

All these remedies should only be pursued with the active engagement and subject to the free, prior and informed consent of the local communities.

The problems we have identified have a far wider relevance. GAR is applying this same approach in eight plantations in Borneo and in its massive, highly controversial concession in Liberia, Golden Veroleum Limited.

GAR's sister company Asia Pulp and Paper is now applying the same policy in its pulp and paper estates, which cover some 2.4 million hectares.

Recently the world's largest palm oil developer, Wilmar, which trades some 22 million tonnes of palm oil every year, about 45% of the world trade, has also committed itself to the High Carbon Stock approach, though it is yet to roll this out in practice.

Many of the other major traders, retailers and investors in the palm oil sector seem poised to follow suit.

We are calling on them to refine their approach. Forest conservation efforts can't work if forest set-asides are grafted onto ‘land grabs'. They must all learn lessons from GAR's mistakes.

They must start by respecting communities' land rights, securing their livelihoods and making clear from the start which areas they seek to take over for both plantations and conservation. They also have to be transparent about the terms of land deals.

Only then can communities make sensible decisions about whether or not to allow these operations on their lands. As Anton Widjaya, Director of WALHI-West Kalimantan, the local chapter of Friends of the Earth, puts it:

"These kinds of projects are only going to work once local and national governments first recognise peoples' rights and companies understand that they are there as guests of the local communities rather than as feudal landlords.

"This is what it means when we say that all such operations require communities' free, prior and informed consent."

Part of the greater struggle against palm oil

Our report is replete with quotes from affected Dayak and Malay community members who are being impacted by the project.

They see the struggle they are in with PT KPC as part of a wider problem they face against oil palm plantations taking over all their lands, which is going to force them into other forest areas just to survive. As one resident told us:

"If people chop down a few trees just to build a house and bring the timber to Selimbau the police are waiting. But the oil palm companies can cut down the whole jungle ... It shows we have no rights here.

"The Government is cruel to the people, they don't care about the people... There are big, big problems ahead. When all this land has been taken by oil palm, the people will be landless and they will look north to find new lands. There are going to be conflicts over land along those boundaries." [referring to the Iban and Kantu' peoples' lands to the north]

"Don't blame the communities if, in the future, they encroach on the national park because their subsistence has been taken from them. They need timber and farmland to make their houses and plant their crops and there is not timber or land left nearby their villages."

We can't talk about 'sustainable palm oil', if the rights and livelihoods of indigenous peoples and local communities are undermined and made unsustainable in the process.