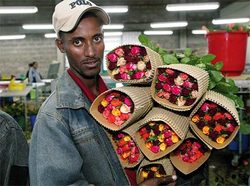 The Ethiopian government has identified five corridors consisting of 50,000 hectares of land for horticulture companies.

Ethiopia has readied 50,000 hectares of land to be leased for horticulture development, according to the Ethiopian Horticulture Producers Exporters Association (EHPEA).

Despite its huge potential for the development of horticulture, the size of land developed with flower, vegetables, and fruit until 2011/2012 is 12,552 hectares.

However, during the past five or six years, the industry has been growing significantly. Currently, over 120 companies are engaged in the cultivation of horticulture products.

Due to the prevailing investment environment, attractive incentive, by the government and cheap labor, Ethiopia has now become a center of attraction for foreign direct investment (FDI) in horticulture development.

“In order to meet the increasing flow of investment in the horticulture sector, the government has identified five corridors consisting of 50,000 hectares of land,” Tewodros Zewdie, Executive Director of EHPEA told WIC.

According to him, these corridors are found in Oromia, Amhara, Tigray, SNNP and Eastern region where there is huge potential of land, labor and infrastructures.

Though horticulture development in Ethiopia started a decade ago, the industry has been playing a key role towards generating foreign exchange and creating labor.

The sector has generated some 265 million US dollars in 2011/12 and created million of jobs, Tewodros said. According to him, the revenue is expected to increase in the just conclude fiscal year.
Flowers made up the biggest share in export value, according to the executive director. Ethiopia is the second largest supplier and exporter of flowers in Africa.

“Efforts are being made to export Ethiopia’s horticulture products to North America, Japanese and African countries’ markets,” Tewodros pointed out.