No to greedy investors 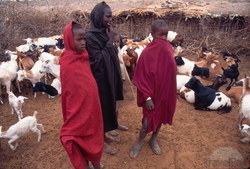 "It will be a huge mistake to hand over to these corporations most of our land rights. In fact it is the subsistence farmers who produce more than 90 per cent of the food we consume."  (Photo courtesy of Kwekudee)
Tanzania Daily News (Dar es Salaam) | 16 January 2014

No to Greedy Investors

POSSESSION of arable land is of great importance for farmers in rural Tanzania. It is also of paramount importance in determining our future for the well-being of our people.

The numerous land disputes are clear-cut testimony to this fact. We, however, are grateful that our government has realized this and is not eager to parcel out too much land to transnational corporations.

No wonder President Jakaya Kikwete refuted claims that his government grabs land from poor farmers and hands it to investors. So, we are lucky that a great part of our land is not in the hands of transnational corporations like it is in some countries in our region.

It will be a huge mistake to hand over to these corporations most of our land rights; the rights that defend farmers. In fact it is the subsistence farmers who produce more than 90 per cent of the food we consume.

The farmers also contribute 25 per cent of the Gross Domestic Product and help the nation earn foreign exchange by 34 per cent. It is, however, on record that greedy officials often collude with corrupt elements in government at district, ward and village levels to grab farmers' land and pass it over to investors.

This has often stirred fierce land conflicts. The state has already moved to stem this rot. It has announced that from now on, foreign investors who intend to invest in agricultural ventures will be allocated a maximum of 10,000 hectares.

A similar directive applies to local investors. The idea is to slam the brakes on haphazard allocations farmland that often leave large tracts unattended for years. The move will also curtail what land grabbers call 'land banking.' Conflicts over land are so numerous.

Some pit investors against villagers, some of who opt for an arrow fight. Other disagreements pit farmers against livestock keepers. It is high time such conflicts were shot down. Land grabbing is, indeed, bad. No wonder investors and their cronies are not taken kindly in some localities.

It is worthwhile to point out here that this is an undesirable practice that is knocking small-scale farmers off their feet. The wickedness of greedy officials in districts, wards and villages must be stopped.

It impoverishes the poor. The crime is committed with stone-hard insensitivity to the suffering of poor farmers. It is madness.