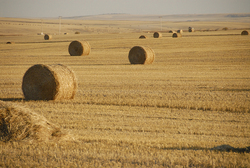 by Mary MacArthur
OLDS, Alta. — Canadian farmers know land is a good buy, but a growing number of foreigners also want to buy it as a way to guarantee food security.

“For all these countries, it’s about food security,” said Shaw, who is still in negotiations for his services.

As a farmer, Shaw is conflicted about helping foreigners buy farmland in Canada. He doesn’t want to be pushed off the farm by expensive land driven up by foreign investors. However, as a realist and an exporter, he realizes someone will help sell the land if he doesn’t.

“I’m not the only one they’ve approached,” said Shaw, who farms near Didsbury.

It was through Shaw’s export business that one of the world’s largest dairies asked him to help it buy land. The 40,000 head operation requires a secure source of forage.

Countries such as Saudi Arabia and UAE have a good source of forage now, but it all hinges on irrigation. Canada’s dryland forage industry, which produces hay with no irrigation, looks like a good long-term source of livestock feed.

Shaw said the middle class in those countries is driving demand for milk and meat.

“The old days of a rice bowl are gone. The value of our land is becoming more and more in demand because of water.”

The buyers are looking at land in Canada, the United States and Mexico. They already own farmland in South America, Eastern Europe and Australia.

“They want to develop their food source,” he said.

Shaw said he advised the buyers to work with large Canadian farmers with knowledge of Canadian farming rather than buying large tracts of land and farming it with non-Canadian help.

Tom Neufeld of Coldwell Banker in Saskatoon said about half of his farm sales the past two years have been to immigrants to Canada. About half of them will become farmers and the rest want farmland as an investment.

Neufeld received a call after Christmas from a potential buyer in Bangladesh wanting to immigrate to Canada but also to buy farmland.

“They want to buy land as an investment.”