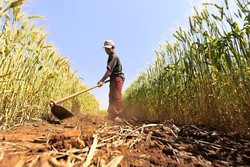 Nidera has access to Latin American grain, including its own farming operations on 22,000 ha in Argentina. Above, a wheat field in Paraguay. (Photo: Agence France-Presse/Getty Images)

Cofco submitted a binding bid for the stake last month, a person familiar with the transaction said. The stake is valued at around US$250 million, but it wasn't clear how much Cofco offered to pay. The terms of the deal were being discussed, the person said.

A stake in Rotterdam-based Nidera would give Cofco access to grain-producing areas in Latin America. Nidera, founded in the 1920s, took its name from the first letters of countries where it had dealings: the Netherlands, the (East) Indies, Deutschland, England, Russia and Argentina. The closely held company employs about 3,800 people in 20 countries.

Chinese companies are eager to gain access to agricultural resources as increasing urbanization changes domestic food tastes and drives demand. Meanwhile, scandals within China over tainted food have raised concerns about food safety. The country's growing wealth is changing the nature of food trade. China became a net importer of rice in 2011, and the gap between imports and exports has widened in recent years.

A deal between Cofco and Nidera would follow similar deals struck by Japanese trading houses, which analysts say are becoming increasingly important players in a global grain trade dominated by a handful of firms.

The biggest of such deals was Marubeni Corp.'s 8002.TO -0.93% US$3.6 billion acquisition of U.S.-based Gavilon Group LLC in 2012, making Marubeni one of the biggest grain traders in the world. Toyota Tsusho Corp. 8015.TO -4.36% the same year took a minority stake in a grain joint venture of Australia's PentAG and Nidera, a deal the companies said would improve Japan's access to grain and offer the joint venture wider access to Asian markets. Japan is the world's biggest importer of corn.

—Isabella Steger in Hong Kong, Chuin-Wei Yap in Beijing and Maarten van Tartwijk in Amsterdam contributed to this article.