Farming and food in Africa and the mounting battle over land, water and resource rights

Farming and food in Africa and the mounting battle over land, water and resource rights

Africa is being heralded as the new frontier for commercial farming but, as governments and investors sign deals, a counter-movement of family farmers is promoting alternative pathways to development.

The International Year of Family Farming is now underway, and never before have family farmers in Africa been more under threat.

Large land deals between African governments and usually foreign (and sometimes domestic) investors have seen swathes of the countryside leased or concessioned, often for as much as 50 to 99 years. From Senegal in West Africa to Ethiopia in the Horn, and down to Mozambique in the South, land considered ‘idle’ and available has changed hands, with profound implications for local people and the environment. 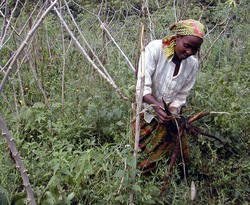 Peasant farmer in Cameroon: invest in African farmers rather than give away their land, argues Alangeh Romanus Che.

With estimates ranging from 56 to 227 million hectares globally (with 60-70% of this in Africa), what is clear is that what has taken place in the past 5-10 years is a rapid transformation of landholding and agricultural systems, not seen since the colonial period. Underpinning these deals is the longstanding failure of many African states to recognise, in law and practice, the customary land rights of existing farming households and communities, and the perpetuation of the colonial legal codes that centralise control over such lands in the hands of the central state, as trustee of all unregistered property.

It is not only African land and water that is now so desirable for international investors, but also growing African consumer market demand for food. In the face of growing urbanisation and consumer demand in Africa’s cities, the challenge is to scale up production and connect small farmers to markets, lest the benefits of rising consumer demand in Africa’s cities be netted by importers and foreign supermarkets.

The ‘land grab’ raises questions not only about land rights and transparency in investment, but also what constitutes inclusive agricultural development and how to bring it about. With growing urgency among development institutions globally to arrive at agreement on how to stop land grabs while still promoting investment, the stakes are high.

At a recent meeting of the Economic and Monetary Community of Central Africa (CEMAC), parliamentarians and small-scale farmers from across this resource-rich region butted heads over what kind of investment was needed. The Vice President of the Pan African Parliament, Honourable Roger Nkodo Dang of Cameroon, presented an argument in favour of the ‘industrialization’ and commercialisation of agriculture:

“We really need to attract investments in the agricultural sector… It is very important for us to work to find the solution for food shortage that we have. Most African countries have an old-fashioned agriculture. The industrialization of agriculture is very important. We need to have great areas of land to use agriculture. We see that when Africans do agriculture, it is not the type of agriculture that is bringing development. We have great, great areas of forests, and we need to work so that we can use those lands. How can we reconcile this development with the people who are in rural areas?”

Discourses such as these ignore the inevitable tensions that arise: clear-cutting tropical forests to make way for palm oil plantations destroys carbon sinks; removing local farmers to make way for commercial plantations might enable efficient food production for global markets, while undermining the food security of local people. Often the presumed outcome is that African farmers will become wage workers on their own land, yet most assessments – including The World Bank’s 2011 report on ‘rising investor interest’ in agriculture (1) – have found that they are inevitably worse off as workers than as self-employed farmers. Yet there are emerging answers, coming from Africa’s farmers themselves.

Invest in African farmers rather than give away their land, argued Alangeh Romanus Che, of the Regional Platform of Farmers’ Organisations of Central Africa (PROPAC), a network of membership-based farmers’ associations across ten countries in Central Africa. ‘All farmers depend on land as their principal capital, any denial of this access will impact negatively on farmers’ said Che.

The international movement of peasants and family farmers, La Via Campesina (literally, ‘the peasant path’), has rejected efforts to ‘clean up’ land grabs by creating good governance guidelines for the private sector to regulate itself. And African farmers’ organisations from across West, East and Southern Africa are now mobilising around an alternative vision for the future, not of corporate-dominated industrial agriculture, but family farming feeding Africa and the world. Central to their programme are two inter-related concepts. Land sovereignty means that development should not be based on dispossession but on securing the rights of communities to their land, water and forests, and to supporting their types of farming methods, including low-cost agroecological farming. Food sovereignty means privileging the local, ensuring the farm and trade policies support local and regional markets, and limit the access and control over resources by corporations. In these ways, they argue, investment in African farmers – rather than investment that dispossesses them – can produce ample, healthy and safe food.

These arguments reflect the on-going battle over how to define and ensure ‘responsible agricultural investment’. On 28-29 November 2013, the Committee on World Food Security presented its ‘zero draft’ (2) for discussion at an Africa-wide consultation held in Johannesburg – and the response was telling.

African farmer organisations insisted that transparency is just a starting point; any responses must grapple with the substantive question of what kind of changes are being brought about, in land use, in social relations, in wealth distribution. Following years of chronic neglect, African agriculture clearly is in desperate need of investment. Farming continues in the face of official neglect, poor infrastructure, farm subsidies in Europe and North America, and competition with these cheap imports in local markets. What is needed for a turnaround in African agriculture must start with reconsidering the slashing of subsidies, agricultural deregulation and trade liberalisation that constituted the policy formula foisted on many African states over the past three decades.

Responsible investment frameworks tend to wrongly assume that ‘investments’ are necessarily external, private and land-based. Other possibilities include public as well as private investments in infrastructure, goods and services to enable farmers to commercialise and scale up production, access cheap and appropriate inputs, improve their productivity, add value to their products, access better markets, and fetch better prices for improved quality products.

As observed by Ambassador Mary Mubi of Zimbabwe, permanent representative to the Committee on World Food Security, at the Africa consultation:

‘Women provide most investment in food production in Africa. It is smallholder farmers who are the biggest investors. When we talk about investors, too often we think of a man coming off a plane with a briefcase – we need to rethink this. Most people in the world are fed by smallholder farmers, and they are women.’

The challenge remains to develop concrete alternative development programmes that confirm land and other resource rights in the hands of local farming families and invest in them.

Dr. Ruth Hall is an Associate Professor at the Institute for Poverty, Land and Agrarian Studies, University of the Western Cape, South Africa.