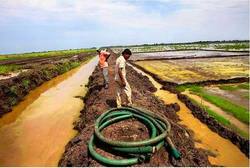 The Pakistani company MCG Consulting, which had been working with Saudi Star Agricultural Development Plc on a rice farm in the Gambella Regional State, has pulled out of the project.

MCG consults on agricultural projects in many countries, and had been working with Saudi Star, the company owned by Ethiopian-born Saudi business tycoon Sheik Mohammed Hussien Ali Al Amoudi, on a modern rice farm in the Abobo woreda.

MCG was responsible for day-to-day activities on the farm, including cultivation and harvesting, and had been providing training for Ethiopian employees working for Saudi Star. Reliable sources told The Reporter that MCG's contractual agreement with Saudi Star terminated on October 18. Twenty-two employees of MCG working on the rice farm have since returned to Pakistan, with the remaining four staff members leaving Abobo on November 6. Sources said that Saudi Star was unable to renew the contract with MCG due to financial constraints. Saudi Star launched the Abobo rice farm project five years ago, acquiring 10,000 hectares of land near the Elewero irrigation dam, built by Russian engineers during the socialist era. However, the company developed only 250 hectares of the land.

Experts told The Reporter that the rice produced by Saudi Star is premium quality, "It is the best rice ever produced anywhere in the world," they announced. However, the company is languishing in deep financial problem.

Saudi Star was building a huge rice warehouse and processing plant in Abobo and Bishoftu (Debre Ziet), Oromia Regional State. Sources said the construction is not finalized, and producing rice without the processing plant is a problem by itself. "Saudi Star Ethiopian staff were trained by MCG and they can run the farm by themselves. However, managing the processing plant might be a challenge for them," sources added.

The Saudi Star rice farm project is financed by Al Amoudi and the Saudi Arabian government, with the main objective to export high quality rice to Saudi Arabia. The company has invested a huge sum of money on agricultural machinery, said to be worth USD 80 million. However, for undisclosed reasons the company finds itself in a dire financial crisis. In 2012 Saudi Star announced plans to invest USD 2.5 billion by 2020 in developing the rice-farming project. The company also said that it would develop the infrastructure of the region, building schools and clinics for local people.

The company, based in Addis Ababa, leased 10,000 hectares in the Abobo woreda for 60 years, at a cost of 158 birr per hectare annually, and planned to rent an additional 290,000 hectares from the government. None of the company's business plans have materialized so far. The Ministry of Agriculture is unhappy with the poor performance of the company, and has written a letter warning it to take corrective measures and expedite the investment activity on the farm. The water canal construction work that was being undertaken by another Pakistani company is suspended, and the company's farm development plan is also in limbo.

Saudi Star is not the only foreign company that has failed the Ethiopian government's ambitious plan of expanding commercial farming throughout the country, especially in the Gambella region where there is an abundance of fertile arable land. The Indian food processing company Karuturi Global Ltd. (KARG), which plans to produce commodities including palm oil, sugar and rice on 312,000 hectares of rented land in Ethiopia, is also on the verge of collapse.

Another Indian company Verdanta Harvest Plc., which pledged to develop tea plantation in the Gambella region, was found to be engaged in the timber trade to the dismay of local residents. Recently the farm, found in the Godera woreda, was set on fire by disgruntled residents. However, there are other companies working according to business plans submitted to the government, like Green Valley (Indian), Ruchi (Indian), and Toren Plc. (Turkish), which are farming in the Gambella region and performing well.