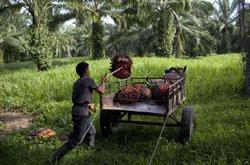 Disputes over land in Honduras' Bajo Aguan Valley have led to the deaths of 63 people, mostly peasants (Photo: AP)

An internal World Bank investigation says the bank's private lending arm violated its own social and environmental rules in approving a $30m loan to a Honduran palm oil magnate allegedly tied to the forced eviction and deaths of dozens of land activists.

The IFC said it was "deeply saddened" by the loss of life resulting from the land conflicts - risks the agency determined were "manageable" when it initially assessed the palm oil project in 2008. Both the IFC and Dinant said they disagree with parts of the audit released Friday but that they are taking the allegations seriously.

The audit by the Office of the Compliance Advisor Ombudsman (CAO) says a standard news search required by the World Bank revealed damning allegations against Facusse. Public news articles show Facusse allegedly misused his political influence, was accused of involvement in the murder of an environment activist and land disputes with indigenous communities, had an arrest warrant issued in relation to environmental crimes, and had his properties used for drug trafficking.

The search, the CAO said, shows "IFC staff either knew about these allegations and perceptions and failed to deal with them as required ... or did not conduct the required news agency searches".

David Pred, executive director of Inclusive Development International, said the case shines a spotlight on the kind of "dirty business" the World Bank is increasingly engaged in as it expands its investments in high-risk environments.

"This audit, and the Bank's response to it, shows that IFC's social and environmental requirements, touted as the 'gold standard', come with a wink and a nod that companies like Dinant can literally get away with murder and still boast the World Bank's stamp of approval," Pred said in an email to Al Jazeera.

A history of conflict

The blood is being shed in Honduras' northern Aguan Valley, where land disputes are age-old. Agrarian reforms of the 1970s saw indigenous-held land redistributed to farmer cooperatives. Those cooperatives ended up in bankruptcy with neoliberal reforms, and in the 1990s, the government and cooperatives sold the land to a few wealthy Hondurans, including Facusse.

Activists claiming ownership of Dinant properties are known to play a game of cat and mouse with security forces, occupying disputed properties, being evicted, and then returning. The confrontations often turn violent, according to groups like the International Federation for Human Rights, which have monitored the conflict.

The CAO audit notes the murders of at least 102 people affiliated with the peasant movement in the Aguan Valley between January 2010 and May 2013, according to civil society groups. Forty of those deaths, the CAO said, were specifically linked by human rights groups to Dinant properties and security forces.

The audit also notes allegations that at least nine Dinant security personnel were killed by affiliates of the peasant movement.

Dinant's spokesman Roger Pineda has denied the company's involvement in violence against anyone embroiled in land disputes surrounding Facusse's property. He told Al Jazeera Dinant's security forces are the victims of attack by armed invaders trespassing on the palm plantations. Pineda also rejected allegations Facusse's landing strips were used to transfer drugs. He told Al Jazeera that drug traffickers had forcibly taken over the property and that Facusse surrendered his airstrip to local military authorities until recent months.

The five-point plan issued by the IFC in response to the audit said it would help Dinant conduct a massive security review and that the company would collaborate with local authorities to investigate credible allegations of unlawful or abusive acts.

"Moving forward, we will continue to monitor the implementation of Dinant's environmental and Social Action Plan, and look to bolster our procedures in relation to environmental and social risks in fragile and conflict-affected areas," the IFC said in response to the audit.

Leaving the job of investigating abuses to the people allegedly complicit in them is wrong, according to Jessica Evans, senior international financial institutions researcher and advocate at Human Rights Watch.

"Instead of the accurate, adequate, and objective assessment of the allegations its policies require, the IFC is leaving the job to the fox that raided the chicken coop in the first place," Evans said. "Human lives and livelihoods are at stake here. The IFC should demand an external, expert investigation that could create a framework for Dinant to remedy any violations of its responsibility to respect human rights."

The IFC said Dinant would lose its funding if it doesn't comply with the action plan. The lending agency already put a hold on half of its $30m loan to Dinant in mid-2010, following human rights complaints by the Washington-based group Rights Action.

However, that did not stop the IFC from calling Dinant owner Facusse a "respected businessman" and later approving a $70m investment in one of Dinant's biggest lenders, Banco Financiera Comercial Hondurena (Ficohsa). The investment will give the IFC a 10 percent stake in the Honduran bank.

The Word Bank watchdog found the IFC's "deficiencies" are a by-product of its culture and incentives that measure results in financial terms.

"In a risk-averse setting, accountability for results defined primarily in financial terms may incentivise staff to overlook, fail to articulate, or even conceal potential environmental, social and conflict related risks," the CAO said. "The result, however, as seen in this audit is that the institution may underestimate these categories of risk."

The case is considered a test of World Bank President Jim Kim's leadership. Kim has staked his reputation on taking "smart risks" to end poverty, and on learning from past mistakes.

The CAO is conducting another investigation into how smart the risks were in another IFC project in Honduras. Its query into the human rights impact of the IFC's investment in Ficohsa, and its relationship to Dinant, is due to be completed in June.