EIA cracks down on tardy investors 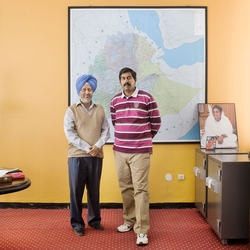 Permit withdrawn! At the end of December 2013, the Ethiopian Investment Agency withdrew 3,000 investment permits that it had previously granted to Ethiopian and foreign companies, Including Karuturi Global Ltd (pictured above).

EIA cracks down on tardy investors

The Ethiopian Investment Agency (EIA) has recently withdrawn 3,000 investment permits that it had previously granted to Ethiopian and foreign companies. Its motive is that awardees did not proceed with their investment projects within the agreed time frames and then did not offer an explanation for delays. The move concerns dozens of projects initiated by Saudi Arabian investors, a number of Chinese-led projects and others by Israeli and Turkish businesses. Other victims include the Indian company Karuturi Global Ltd, which has only put into production a tiny proportion of the 300,000 hectares of land it was granted approval to develop (ION 1364), as well as several subsidiaries of the Midroc group, owned by Saudi Arabian-Ethiopian magnate Mohamed Hussein Al-Amoudi. Projects by other investors have been given a stay of execution but the companies concerned have been told to make headway in the next six months or they may also lose their permits. While the EIA’s move affects thousands of potential investors, instead of informing them personally, the agency simply pinned up a list of the companies whose permits had been withdrawn on a notice-board in the hall of its premises in the last week of December. The lists will only remain on display for another week or so, which is rather unfortunate for the company bosses who happen to be far from Addis-Ababa and will not be able to see them.