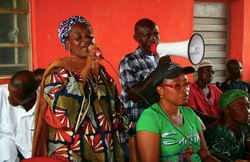 Safiya Vandi (in green t-shirt), pictured at a meeting of communities affected by SOCFIN plantations in Pujehun, Sierra Leone. When bulldozers came to clear her land, Vandi stood in front of them. (Photo: Green Scenery)

On December 9, 2013, a meeting was called in Pujehun District over the lease of 6,500 hectares of prime farmland in this southeastern part of Sierra Leone. Local sources said elders called the meeting to allow people to again express their grievances to the Paramount Chief over the lease of land to the Socfin Agricultural Company.

Hundreds were waiting in the village of Libby Malen for the chiefdom authorities to arrive when they learned that nine of their fellow villagers had been beaten and arrested by the police en route to the meeting. More than three hundred people immediately left the meeting to go to the police station in nearby Sahn and demand the release of the villagers.

They were met along the way by an armed contingent of police who fired tear gas and live bullets into the crowd, leaving many people with serious injuries. One person was shot in the neck and at least 57 people were arrested and badly beaten. Shortly afterwards, a group of thugs, who witnesses report may have been police and/or company representatives, attacked villagers in Libby Malen itself, forcing people to flee into the bushes.

For some time now, those working with the local communities have warned the government and the company over the deteriorating situation in Pujehun.

“The community people are starving at the moment," Frank Williams, networking officer for the NGO Green Scenery, told GRAIN in a November interview. Williams is also the coordinator of ALLAT – “Action for Large scale Land Acquisition Transparency’’ – a civil society coalition formed in 2012 as a watchdog on land issues.

"They don't have enough land to do their farm work. Their lands have been taken away from them. The jobs which the company has offered them... they are being paid less than $50 a month. [...] So these are all issues for the community people. We see future conflicts if the government does not come in at once to address these matters.”

Pujehun District, in southeastern Sierra Leone, was badly affected by the civil war which ended in 2002. Today, the district is one of several parts of the country where the government is seeking to attract foreign investment to set up industrial oil palm plantations. But local communities are rejecting the handing over of large tracts of land to foreign companies.

Two companies – Socfin, the local subsidiary of a Luxembourg-headquartered corporation controlled by the Bolloré group, and India-based Siva Group/Biopalm Star Oil – have between them acquired rights to an area of nearly 90,000 hectares across five chiefdoms in the district.

The affected villagers say no proper consultations were held to enable community members to understand the deal before they were required to sign documents, and many are refusing to give up their lands.

The incident in December is only the latest in a series of hostile and increasingly violent reactions by the authorities to communities' resistance to the loss of their land.

In December 2012, 101 members of land-holding families in the Pujehun district wrote to Sierra Leone's Human Rights Commission complaining about the lack of consultation, the destruction of crops and land, and persistent harassment by the district's Paramount Chief, the police and Socfin personnel. Local NGO Green Scenery also carried out a fact-finding mission into the land deals in the District and published a report.

Socfin's local subsidiary responded by filing a suit for defamation against the NGO.

And then in October 2013, says Williams, the company accused several community members of destroying palm trees belonging to it.

“Six people were arrested,” says Williams. “The charges against them – one is incitement, two is conspiracy and three is destruction of company properties. Those are the complaints made against those six arrested by the Socfin company.”

They were held for several weeks before being granted bail at the end of November. One of the six was among those arrested outside the police station in Sahn on December 9th.

Williams says that the community members are committed to stopping the company, despite the violence and intimidation they face. He shares the story of Safiya Vandi, who refused to allow her land – sold without her consent – to be destroyed to make way for a vast oil palm plantation.

“With strong heart and strong mind, the woman stood in front of the bulldozer so that they could not clear her land,” Williams said. “And her interruption stopped the work for that day. And cases like this may likely come up frequently, because community members' complaints are not being listened to.”