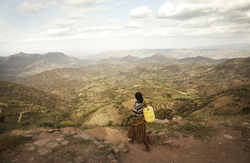 Today, the Governments of Ethiopia, the United Kingdom, the United States of America, and the Federal Republic of Germany announced agreeing to enter a land country partnership to work together to improve rural land governance for economic growth and to protect the land rights of local citizens in Ethiopia.

This partnership builds on existing programmes and represents an important vehicle for increased coordination and collaboration among the Government of Ethiopia and its development partners. The announcement came after the representatives of the heads of state from G8 member states gathered in London to mark the handing over of the G8 Presidency from the United Kingdom to Russia.

The partnership with Ethiopia will support improved rural land tenure security for all, including through appropriate land use management in communal and pastoral areas. It will strengthen transparency in land governance, including by promoting responsible agricultural investment through an improved legal framework and practices.

I welcome this announcement that the Governments of Ethiopia, the United States, Germany and the United Kingdom are entering a land country partnership.

Having secure rights to land will help people across Ethiopia to grow the food they need, boost incomes, defuse conflicts and deal with the impact of climate change. This joint partnership will make sure Ethiopia can make the most of its valuable resources and attract the investment and income needed to boost growth and fight poverty.

The Ministry of Agriculture of Federal Democratic Republic of Ethiopia welcomes this joint partnership in the context of supporting the implementation of Ethiopia’s Rural Land Administration and Use plan under its policy and strategic frameworks. It will help the country to ensure and sustain its economic development by strengthening rural land governance in view of fostering food security and realising constitutionally recognised rural land related rights of Nations, Nationalities and People of Ethiopia. I hope the current harmonisation, co-ordination and alignment mechanisms of Rural Economic Development and Food Security Working group (RED-FS SWG) and Sustainable Land Management Platforms will serve as an engine to further deepen our joint partnership on rural land.

Germany highly welcomes this partnership between our four Governments that will contribute to better land management in Ethiopia, thus promoting transparent, fair and sustainable investments in land. Access to land and land tenure security are crucial for food and income security for the rural population in Ethiopia. This partnership will complement and strengthen the Government of Ethiopia’s efforts in the sustainable land management program to which Germany has been committed for years. This partnership also shows that the G8 is delivering upon its commitments promptly and with a view to the needs and priorities of our partners.

We welcome this joint partnership in the context of the G8 and congratulate the Government of Ethiopia on redoubling its dedication to achieving improved land governance and land tenure security for all. The Government of Ethiopia has made great progress in recognizing the rights of smallholder farmers with support from USAID, and we look forward to broadening and deepening this collaboration in the country’s pastoral areas.

This follows the announcement of seven partnerships made last June at the G8 Open for Growth Summit. These partnerships between G8 member states and developing countries are designed to support governments in aligning their country frameworks with the globally agreed-upon Voluntary Guidelines on the Responsible Governance of Tenure of Land, Fisheries, and Forests in the Context of National Food Security and to improve rural land governance and the security of land tenure for individuals, communities, and investors.

The partnership represents the continuation of the commitments made under the New Alliance for Food Security and Nutrition, an effort by African heads of state, corporate leaders and G8 members to increase food security and nutrition in sub-Saharan Africa, and takes note of the African Union Declaration on Land Issues and Challenges. It will also coordinate and harmonize support from existing and potential new development partners in the land sector. These objectives will be achieved through ongoing and potential additional future programs in support of improved rural land governance.

The partnership will enable better collaboration, coordination, and sustainable impact. This will be achieved under the on-going RED-FS Working group and Sustainable Land Management Platforms. Further details on the partnership will also be communicated over the course of the next year through the G8 and the Global Donor Working Group on Land, which was recently established by bilateral and multilateral donors to improve coordination of their respective efforts in the rural land sector.