The UK is the fourth largest investor in the world in African land - but how much does it have and what is it using it for?

The UK is the fourth largest investor in the world in African land - but how much does it have and what is it using it for? 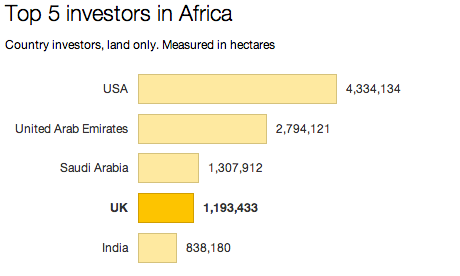 The UK has over 1 million hectares leased on the African continent. We take a look at where they are. Image: Guardian

In terms of hectares, the UK is the fourth largest investor in the world in African land. This is what is indicated by Land Matrix (5 Nov 2013), the database which collects all transnational contracts signed between governments and investors all over the world for the assignment of land, documenting governments' and investors' tendency to lease land which will then be used for agriculture, extraction of raw materials, industrial plants and tourism.

Among the African countries which have assigned the largest amount of land to foreign investors South Sudan is particularly notable with its 3,491,313 hectares, followed by the Democratic Republic of the Congo, Mozambique, Sudan and Sierra Leone – which together add up to over 10 of approximately 33 million hectares of land leased worldwide.

Besides abandoned projects and unsigned contracts, Land Matrix lists 38 land deals that have the UK in a leading role, 12 of which have been signed in collaboration with other investing countries. Among the British projects, 13 turn out to have started production, while the others have not yet begun or are still in their start-up phase.

In terms of amounts of land, the African country that has assigned the most land to the UK is Sierra Leone, with 692,606 ha, which hosts the two largest British investments: Whitestone Charles Anderson, with 525,000 ha, and the SLGreen Oil Corporation, with 121,406 hectares.

The type of crop grown in 55% of all the land acquired by UK companies in Africa is unknown. Of the remaining land, 150,000 hectares are allocated for jatropha, oil palm and castor oil palm for biofuel production. In general, most investments are aimed towards agriculture, both for food crops and non-food crops, while the rest are aimed towards timber production.

How many hectares have been leased, in total, since the land rush began? Any attempt to make an outline of the amounts for this phenomenon will run into a multitude of contradictory figures. The World Bank has spoken of 56 million hectares leased just from 2008 to 2009, as a consequence of the food price crisis.

The International Food Policy Institute and the Oakland Institute have counted 15-20 million hectares from 2006 to 2009. In 2011 Land Matrix, a database of large-scale land acquisitions developed by four international research institutes including the GIGA (German Institute of Global and Area Studies) and the GIZ (Deutsche Gesellschaft für Internationale Zusammenarbeit), calculated 227 million hectares of land leased from the year 2000 onwards. A stellar amount, calculated from sources that are not always reliable, and which in June 2013, after a re-launch of the database, was downsized to 33 million hectares detected from signed contracts. An area equal to eight times the size of the Netherlands.

"It is hard to tell if those figures are correct with reasonable certainty", says Andrea Fiorenza, researcher for the International Land Coalition and co-author of a collection of studies called Commercial Pressure on Land, because "some projects begin, and then they run into various different kinds of problems and are discontinued and close down, or on the contrary they expand beyond the legally arranged surfaces". Furthermore, the lack of transparency of developing countries' governments doesn't allow a clear picture of the situation. However, the Land Matrix database does not aim to provide final data, but to "detect the trends, drawing from multiple sources and trying to keep constantly up to date".

Explore the global debate on the "land rush"

For more on large-scale land acquisitions, an interactive map has been developed collecting stories participating in the debate on the land rush in Africa. The map displays all players involved in the discussion, showing documents from the academic community, reports from the international civil society, journalistic investigations and participations of companies and institutions. Furthermore, the map allows the submission of new articles by filling in a crowdsourcing form.

This post is part of the Innovation in Development Reporting programme operated by the European Journalism Centre. The project development also saw the contribution of Andrea Fama, Cecilia Anesi and Isacco Chiaf.

Get the numbers and get involved