Looming nightmare, Daewoo Logistics back on the offensive? 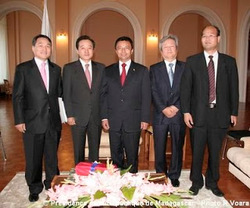 Looming nightmare, Daewoo Logistics back on the offensive?

Five years after it was proposed, Daewoo Logistics' agribusiness project, which envisioned a 99-year lease of 1.3 million hectares spread across four regions of Madagascar – Atsinanana, SAVA, Melaky and Menabe – remains a global symbol of land grabs. Considered by some Malagasies to be fiction, and by the TANY Collective as a nightmare(1), this project has now returned to the news.

Since the last alert about this issue from the TANY Collective in January 2012(2), the Deputy Minister responsible for Development and Land Use Planning published the documents on his website which in 2010 canceled the land procurement requests submitted in October 2008 by Daewoo's subsidiary, Madagascar Future Enterprise. In January 2012, an official from MFE told the media, “We definitively abandoned this project to buy land with Daewoo in 2009.”(3)

Yet in October 2012, a mayor in the southwest of the island said he had leased a hundred hectares, without a written contract, to a company – M.F.E. – with headquarters in Ivandry-Antananarivo, on which to establish a “pilot” maize plantation. The peasants in the area protested against the resulting contraction of the area available for them to graze their zebus, because local communities had not been consulted over setting up this plantation, none of the promises of compensation (a primary school, a market, a hospital...) had been fulfilled, and the people who worked for the company clearing larger and larger areas of land complained that their daily wage was too low.(4)

In February 2013, a journalist with the Korea Herald newspaper wrote, “Korean diplomats are working hard to help Daewoo Logistics regain a huge land deal it lost after a 2009 coup d’etat in the island nation in anticipation of new elections slated for the first half of this year. For starters, the government is looking to open a diplomatic mission in Madagascar” according to the the Africa Division of the Ministry for Foreign Affairs and Trade. The journalist also quoted the Second Secretary responsible for Madagascar in the same Ministry, according to whom MFE Corporation is presently working on an agricultural operation of 250 ha, which will facilitate the expansion and agricultural exploitation of larger areas if Daewoo regains its leased land.(5)

We then read in the press that on May 14, 2013, representatives of the embassy and South Korean businesses in South Africa had carried out “a prospecting visit” to Antananarivo and “made a presentation on the economic situation in their country to an audience of business leaders senior Malagasy officials, brought together for the occasion by the Business Association of Madagascar (GEM)” (Groupement des entreprises de Madagascar ).(6)

In June 2013, Africa-Asia Confidential recounted this visit by the Korean delegation, reporting that it had “explored the modalities of resurrecting the contract”. Still quoting the director of the Africa Division of South Korea's Trade and Foreign Affairs ministry, the journal reported that the South Korean government had taken part in programme to support the electoral process in Madagascar (PACEM – Projet d’Appui au Cycle Electoral 2012-2014) and that, despite the suspension of the project by the transitional government, Daewoo was continuing to take steps with a view to eventually leasing the land.(7)

Effectively, even if the president of the High Transitional Authority said in March 2009 that “the Daewoo contract was canceled”(8), and commentators wrote that Daewoo Logistics had left Madagascar, keen observers would have noted that since February 2009, Daewoo's officials had announced [only] that they would delay the start of their project to produce palm oil and maize due to the political situation(9), all the while continuing to ensure that “logistical” work at the heart of the Sheritt-Ambatovy project. In June 2009, Daewoo International Corporation signed a contract with the transitional authority for the construction of a “coal-fired thermal plant” between Beforona and Toamasina, which is currently supplying power to the mining operation at Ambatovy.(10)

Demands and proposals of the TANY Collective

The situation is serious. In the current national context, the demands on – and hunger for – Madagascar's land and natural resources are numerous and multiplying. Many unacceptable projects are awaiting the holding of elections before being put in place according to the terms of prior or new contracts. We are redoubling our vigilance over our land and our heritage at a time when public opinion is denouncing the inexplicable enrichment and abusive expenditures of many senior figures in the face of a brutal impoverishment of the country as a whole.

We again demand transparency over the terms of all land deals, past or future, so that all the citizens in the affected areas – particularly farmers and herders, supported by legal professionals, economists, and experts in land and the environment – can evaluate the impact of the projects at different levels, and have their say over the decisions to be taken, and ensure follow-up during implementation.

We respect the human rights of Malagasy peasants and we reject their expulsion and displacement from their lands under the pretext of investments which will only benefit a minority, but not truly contribute to development. We want to preserve our territory so that peasants can continue to occupy and cultivate their ancestral lands and feed Malagasy families – rather than produce solely or principally for export.

Going forward, we demand a coherent land and agriculture policy from the decision-makers, leaders and elected officials, a policy elaborated along with – and in the interests of – the majority of the population, to achieve better and sustainable access to land for peasants, food self-sufficiency, and a a sufficient and healthy food supply for Malagasy families.

TANY – Collective for the Defense of Malagasy Land