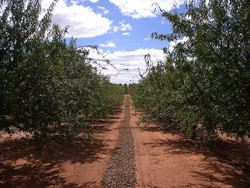 Olam, which is backed by sovereign wealth fund Temasek Holdings, will lease-back the almond groves and land as well as related farming and irrigation infrastructure for a period of 18 years. (Photo: Flickr)
Financial Review | 15 Nov 2013

IN THE shadow of the $3 billion GrainCorp takeover and the $500 million Warrnambool Cheese & Butter ­takeover, Australia's biggest agricultural deal for the year so far has gone largely unnoticed.

Late on Wednesday night an Australian trust managed by Laguna Bay Pastoral and backed by Swiss, Danish and United States fund managers agreed to pay more than $200 million for 12,000 hectares of almond groves in northern Victoria.

It is the biggest agricultural deal transacted in Australia since the settlement of Inghams for $870 million earlier this year, according to Dealogic.

It will still be subject to foreign investment review board approval, The Australian Financial Review reports.

Olam International, the Singapore based commodity trader now being hounded by a US hedge fund for its performance, sold the groves after buying them in 2009 from the failed managed investment scheme company, Timbercorp for $128 million cash.

Olam, which is backed by sovereign wealth fund Temasek Holdings, will lease-back the almond groves and land as well as related farming and irrigation infrastructure for a period of 18 years.

At first glance Olam may have done well out of the investment reporting that it will book a one-time post tax capital gain of $45 million upon completion of the transaction.

Olam Australia executive director and country head Bob Dall'Alba said the company was committed to the assets for the long term.

"Our interests are fully aligned with the value expectations of the new long-term investors and there will be no change in the way we are going to run the operations."

Unlike the majority of Australian institutional investors, the new owners of the groves have the patience to invest in Australian agriculture.

The Australian trust, is partly backed by the Swiss fund Adveq Real Assets Harvested Resources which manages US$5.0 billion in assets.

Adveq's executive director Berry Polmann said the fund was "convinced about the potential of the almond orchards and looked forward to building a farming relationship with Olam, centred around sustainable practices."

Another of the major backers is the Danish fund Danske – part of the Danske Bank Group and the Danish pension authority Danica. Danske manages more than €95 billion in assets.

The third major investor is the Municipal Employee Retirement System (MERS) from Michigan in the US which currently has US$8 billion in assets under management.