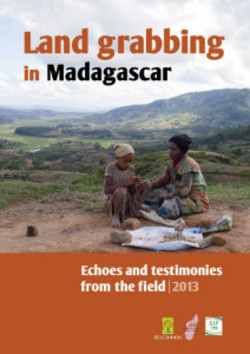 Madagascar, a country rich in natural resources and potential to sustain its own development even though its people is one of the poorest is the world, is facing strong pressures of land grabbing by local and foreign investors at the expense of peasant and local communities.

After the news broke out in late 2008 of the scandalous Daewoo Logistics project supported by leaders of the Malagasy state, and the change of the country's leadership soon after in early 2009, the granting of Malagasy land to investors was never questioned by the transitional government. Even though Malagasies have a strong cultural tradition of attachment to their ancestors land, law 2007-036 in particular was promulgated in January 2008 allowing the sale of land to foreign-controlled companies as long as they had a local subsidiary. The Constitution voted in 2010 stipulates in its first article that "the modalities and conditions relative to the sale of land and long-term land leasing for the benefit of foreigners are to be determined by law". Communities impacted by land grabs have weak legal tools to turn to. The land reform of 2005 introduced changes by recognising peoples' rights to occupy and use land on the untitled private property. But legislative uncertainty persists regarding vast areas used for grazing.

All over the island, there are conflicts between local communities, peasants, herders and fisherfolk on the one hand and investment firms from diverse sectors on the other. State authorities facilitate and support the investors. Who has access to and control over land changes without communities who live from the land having any power to stop this trend.

"Land grabs in Madagascar: voices from the ground - 2013" brings out the voices and testimonies of those directly involved including the local communities who are victims of these land grabs. It was put together following a trip by Giulia Franchi, member of Re:Common, to learn more about the largest land grab currently in place in Madagascar by the Italian company Tozzi Green. The fields visits and report writing were undertaken jointly by the three civil society organisations: the Italian NGO Re:Common, the Malagasy platform Solidarity among Land Actors - SIF, and the Collective for the Defence of Malagasy Lands - TANY.

The field work also spent time on the island of Nosy Be in the Diana region, to evaluate the impacts of the tourism industry on access to land by local people. At the end of the report, there are testimonies from the QMM-Rio Tinto (UK/Australia/Canada) project in the Anosy region, courtesy of their authors.

All of the projects covered in this report are the work of foreign investors. But we also verified through our field work that national investors are also very active land grabbers in Madagascar, and that the impacts on local communities in terms of losing access to land and to natural resource is not different whether the investor is foreign or national.

It is remarkable that the process of land grabs has been so well accommodated during the transitional regime in Madagascar. The search for investment by central authorities after four years of paralysis should not relegate the interests of the majorities of Malagasies - mainly small peasants, herders and fishers - to second rank. The stakes for local people dispossessed of their lands are high. This report is meant to support and echo their struggles.

The destiny of Madagascar's rural population has to be at the centre of the country's upcoming development policies and agenda. The voices and testimonies from the ground show the real consequences of numerous projects that were supposed to bring development to Madagascar these past years. Malagasy leaders and decision-makers ought to beware of the false promises made by land grabbers, and prioritise instead strengthening peasants' access to land, improving incomes and access to food for the majority of Malagasies, and developing family farming as 2014 will be the year of.

Hard copies of the English version can be requested from Gulia Franchi of Re:Common: <[email protected]>