This is the first of a series of interviews about resistance to the expansion of industrial oil palm plantations in West and Central Africa.

Members of communities affected by these monoculture plantations and civil society organisations from Africa, Europe, the Americas and Asia met in Calabar, Nigeria from 2–5 November 2013. They shared testimonies and analysis of the consequences of the rapid and brutal expansion of monoculture oil palm plantations by multinational companies in different communities and countries.

Nasako Besingi is a land grabber's nightmare. The community organiser and director of Struggle to Economise Future Environment (SEFE) has made a mess of a US company's plans to grab a huge chunk of land in Cameroon's southwest to produce palm oil. Herakles Capital is a venture capital firm based in New York City that is pursuing the acquisition and development of oil palm plantations on over 80,000 ha in West and Central Africa. Nasako has worked tirelessly to investigate and expose the company's project in Cameroon since the moment he learned of it, and helped local people to understand what its plans are all about. Resistance to Herakles is now widespread, but it's come at a high price for Nasako.

"I first heard about the plans for a plantation in our area from a government agent back in 2009," he says. "I was shocked. I told him, 'But there are no available lands in our area.'"

Later that year, at a local meeting of the ruling political party, chiefs from the area were asked to sign a blank piece of paper in exchange for 10,000 FCFA. "None of them knew what they were signing," says Nasako. "We only found out later that the paper was used as proof of local consent for the proposed oil palm project."

By 2010, the government and the company had gone public about the deal. But it was not clear who was behind the project. "They would refer to the company as Sithe Global, which is a US company, when they were talking about it locally and then SCSOC, a company registered in Cameroon, when it came to official communications. To me it seemed like they were hiding the real identity of the company," says Nasako. Only later would it become clear that the company was owned by US hedge fund manager Herakles Capital, which also owns Sithe Global.

An inside source gave Nasako a copy of the Establishment Convention between the company and the government.

"The convention does not specify the amount of lands or the location of the lands involved in the project," says Nasako. "But when the company came to the area, they said that the lands had been allocated by the government."

SEFE organised a meeting in August 2011 to get clarity on the proposed project. They invited all of the affected villages, the government and the company. But the company refused to participate.

"It was then that we realised that this company did not want to negotiate, that they were shunning us," says Nasako. "So we decided to take them to court."

SEFE brought charges against the company for violating national and international environmental and human rights laws to the High Court. The court ruled in its favour, concluding that Herakles did not have permission to operate in the area, but this did not stop the company.

"The company ignored this decision from the court because they had the blessing of the Prime Minister," says Nasako. "We looked at this and said, 'If this company is going to ignore the court, how can we, as villagers, expect them to listen to us?'"

SEFE stepped up its awareness raising work. It organised another major meeting in July 2012 in the village of Meangwe 2. In the days leading up to the meeting, company agents went into the villages warning residents not to attend.

"They told the villagers that it was an illegal meeting, that SEFE was an illegal organisation, and that people would be arrested if they attended the meeting," says Nasako. "But this didn't stop people from coming. It was the rainy season and still over 300 people turned up for the meeting from all the affected villages. For many, it was the first time they had learned about the proposed project and the company."

Nasako's efforts nearly cost him his life. A month after the meeting, he was travelling by motorbike to a village that had asked him to talk to them about Herakles' plans when he was ambushed by a group of men.

"They pulled me off the bike and started punching me," recounts Nasako. "They were yelling at me, saying I was to blame for standing in the way of the company. I recognised all of them as junior managers with Herakles Farms."

Luckily a team of French journalists happened to be trailing Nasako that day. When their truck appeared, the men let Nasako go and fled.

Tensions between the company and the villagers continued to escalate. But the company and the government were still claiming that the local people were in favour of the proposed concession and spreading this misinformation in the national and international media.

"The vast majority of the local people are against what Herakles is doing, and we wanted to show this to the world," says Nasako. 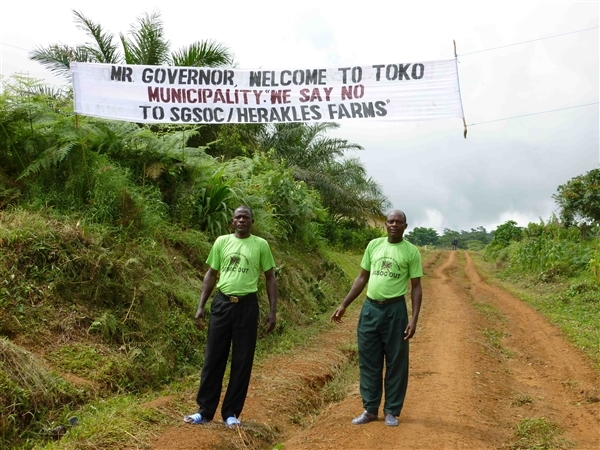 At the request of the community, SEFE came up with a plan. In November 2012, they produced hundreds of T-shirts reading: "No plantations on our land. SGSOC out". They provided these to the villagers to wear to an installation ceremony for a new senior divisional officer in the area to make visible their opposition to the Herakles plantations. But, prior to the ceremony, a large contingent of police and soldiers invaded the SEFE offices and arrested Nasako and 5 villagers.

"They were trying to intimidate us and to provoke the people into violence," says Nasako. "But we insisted that this was a peaceful protest, and we urged people not to engage in any physical resistance because that would serve as an excuse to make further arrests and charges."

Despite the intimidation, around 400 people collected t-shirts. On their way to the ceremony, however, they were violently attacked and molested by the police and military and prevented from entering with their t-shirts on.

Nasako is still awaiting summons from the court to find out what he's been charged with. The other five who were arrested were charged with taking part in the organisation of an undeclared public meeting.

Meanwhile Herakles has filed a separate case against Nasako, accusing him of defamation and suing him for damages. He's awaiting a summons for that case too.

"I won't have the money to pay the damages if I lose," says Nasako. "So this would mean that I would have to go to jail."

Neither the possibility of going to jail nor the threat to his life deters Nasako. He believes that the communities are winning their struggle. Herakles Farms now seems to be in financial trouble, and the government has forced them to scale down their project plans to 20,000 ha.

But that's not enough for SEFE and the villagers. They want the project cancelled.

"We need to continue with the resistance. You never know if the current silence from the company is just a strategy," warns Nasako. "We cannot rest until there is an official announcement that the contract has been cancelled. And other companies are coming in. We know that Cargill is collaborating with the international NGO Proforest to acquire land in a neighbouring area, just to the south of the Herakles proposed project."

Nasako and his organisation SEFE need international support to help in their court cases and in their local work. Those wishing to find out more about how they can help, can contact Nasako at [email protected].