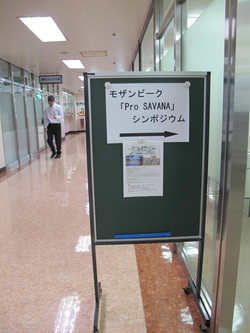 Japanese civil society meeting in Yokohama on ProSavana, May 2013.

Call for an Immediate Suspension and Fundamental Review

We, as like-minded civil society organizations in Japan, call on the Japanese Ministry of Foreign Affairs (MOFA) and the Japan International Cooperation Agency (JICA), for the immediate suspension and fundamental review of the ProSAVANA program. ProSAVANA is a large-scale agricultural development program in Mozambique, conducted as part of Japan’s official development assistance (ODA) and initiated by the governments of Japan, Brazil and Mozambique. This statement is based on the gravity of concerns repeatedly expressed by the farmers and civil society organizations of Mozambique, as well as on the findings of our field research conducted between July and August this year in Mozambique.

ProSAVANA will potentially affect 14 million hectares of land in three northern provinces of Mozambique, an area inhabited by more than 4 million people. The area is equivalent to three times of all the farmland in Japan. Farmers represent over 80% of the entire population in Mozambique. Small-scale farmers make up the overwhelming majority (99.99%) of these farmers and work 95% of all cultivated land in Mozambique. However, under ProSAVANA, farmers have not been respected as right-holders nor have their participation in the program been duly ensured. The National Union of Peasants (UNAC), the largest farmers confederation in Mozambique composed of 2,200 farmers organizations, and civil society organizations have repeatedly raised their concerns regarding the possible negative impacts of large-scale agricultural development and investment schemes of ProSAVANA on the livelihoods of the local small-scale farmers.

It is worth highlighting the importance and significance of the Open Letter, which was released ahead of the Fifth Tokyo International Conference on African Development (TICAD V) on May 28, 2013. 23 organizations representing farmers, religious groups and civil society in Mozambique came together to draft, sign and release this Open Letter addressed to the respective heads of state of Mozambique, Japan and Brazil. The Open Letter, calling for the immediate suspension of ProSAVANA, is unprecedented both in representation and gravity as an objection to aid programs in Mozambique. Mozambican representatives travelled to Japan and successfully hand-delivered the Open Letter to Prime Minister Shinzo Abe on the sidelines of TICAD V this June.

However, the drafting of the master plan, the preparation of Quick Impact Projects (QIP) (programs where “quick impacts” and visible outcomes are expected), and pilot projects funded by the ProSAVANA Development Initiative Fund (PDIF) continued to be prepared and implemented without review. Information disclosure remained to be limited, and neither transparency nor accountability improved in the process. Consequently, anxiety has increased among local farmers and civil society organizations. In addition, no official response has been made to date on the Open Letter, and though cursory consultation meetings have been held with limited participants, it has only served to deepen the concerns and increase the distrust of the majority of farmers and civil society.

At the same time, incidences of land grabs, by both international and domestic investment and businesses in the Nacala Corridor, are being witnessed at an alarming scale. Pressure on land is increasing, and so are conflicts over land. Local farmers in vulnerable positions have been forced off their land, and pushed into hunger and poverty. Local farmers raising their voices have been reportedly harassed and threatened.

ProSAVANA, as it stands, threatens the livelihood of the local small-scale farmers, and risks the destabilization of Mozambican society. It also raises questions concerning the respectability and legitimacy of Japanese official development assistance. We, as like-minded organizations of Japanese civil society, hereby request the government of Japan to initiate the immediate suspension of, and fundamental review of ProSAVANA.

1. We request the Japanese government to immediately reply, in writing, to the Open Letter, submitted by the Mozambican civil society dated 28th of May 2013. This reply should specifically provide a direct response to the immediate suspension of ProSAVANA as requested in the Open Letter.

2. The environmental, political, and social context in Mozambique has deteriorated since the signing of the ProSAVANA agreement in 2009. There have been increased incidents of environmental degradation and of land conflicts arising from land grabbing. Political space to question government policies has steadily decreased. We request that a renewed and independent field research be conducted in the pertinent areas, and that appropriate consultations be held with local farmers and civil society. The fundamental framework of the ProSAVANA should be revisited according to the results.

3. In the consultative meetings held between MOFA/JICA and Japanese civil society groups, the fundamental review of the consultation process with local farmers and civil society was agreed upon. However, not only has the consultation process failed to improve, but the process has increased mistrust toward the program amongst the civil society groups of Nampula and Niassa Provinces, and also among the farmers associations and civil society groups representing the whole of Mozambique. We request that the Japanese government make an effort to accurately understand this situation, and to clarify how and why UNAC and other member organizations of UNAC, which not only legitimately represent the small farmers of Mozambique, but have been extensively involved in the discussion, were excluded from the various discussion arrangements under ProSAVANA.

4. In the fourth and fifth consultative meetings held between Japanese civil society and MOFA/JICA, both of which took place after the delivery of the Open Letter, MOFA/JICA emphasized that ProSAVANA would only be implemented after a thorough consultation process. However, the second round of submissions for the PDIF opened in July, despite an absence of progress in the consultation process, serving only to further deepen local confusion and mistrust. We request that the Japanese government make an assessment of facts, and clarify how and why project
implementation proceeded regardless of the promises made.

6. 2014 is the International Year of Family Farming, where the importance of family farming will be recognized and celebrated internationally. Concurrently in Mozambique, farmers represented by UNAC, together with civil society, are preparing the “National Plan for the Support of Family Farming.” If ProSAVANA purports to support the Mozambican farmers, it would be most appropriate to recognize and provide due support for such initiatives. We request that MOFA/JICA consider and respond to this proposal.

7. ProSAVANA promotes the registration of land titles (DUAT) with the purpose of facilitating investment. However, the premise nor implications of DUAT registration is not yet fully understood by the local farmers, and public debate regarding land policy in Mozambique has only begun. The Mozambique Land Act recognizes the right to land use based on customary tenure without the registration of DUAT. The hasty promotion of DUAT registration risks limiting present and future land rights for farmers. We request that farmers are provided appropriate support enabling them to uphold their rights to their land.