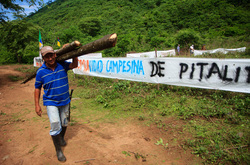 Bristolatino joint editor-in-chief Rosanna West, while working as a reporter at Colombian national newspaper El Espectador on her year abroad, interviewed one Colombian and two Argentine experts about the foreign acquisition of land in their countries. This is a translation of an article that first appeared in El Espectador discussing whether government efforts to limit the often negative effects of land grabbing are working.

As food prices rise steeply, land grabbing (the buying or leasing of large pieces of land in developing countries) by foreign investors has become a growing business. According to Oxfam International, at least 33 million hectares – eight times the size of Holland – of land transactions have taken place since 2001. The concept of wealthy companies investing in poor countries is not necessarily a problem in itself, but when the locals – often indigenous communities – are deprived of their food, their land and their rights as a result, it raises questions over the process.

Between the 9th and 11th October, the Externado University in Bogotá, Colombia hosted a seminar on land grabbing, and the United Nations Food and Agriculture Organization (FAO) invited specialists from Brazil, Holland, Argentina, Mexico, France, the United States and Colombia to participate. I interviewed two Argentine experts, Diego Dominguez and Pablo Sabatino, on the details of land grabbing in their country.

To give you an idea of how the Argentine government has reacted to the situation of land grabbing, in 2011 it implemented a law that limits foreign ownership of land to 15%, a law that the FAO has praised as an example for other Latin American countries to follow. Since then, 15 projects have been put in place to regulate the foreign land acquisitions in Argentina.

The law says that a State, a company or a foreigner cannot acquire more than 1,000 acres in the most fertile areas of the country. Sabatino told El Espectador that the “major purchases are in Patagonia, and in the Argentine littoral zones of Corrientes, Entre Ríos and Misiones, where companies are engaged in the business of timber”.

According to Dominguez, the uses of land in Argentina and the conflicts these land acquisitions bring are varied. “The lands are cultivated for livestock production, and also for soil mining,” he said. He told me that in the province of Corrientes (home of the Guarani indigenous people), American conservationist Douglas Tompkins uses the land with the aim of ecological preservation, and therefore conflicts have arisen with the Guarani people, who use the land for agricultural and mining purposes. Domínguez called him “a conservationist with contradictions”.

The two experts agree that “the restrictions on foreign ownership of land implemented by this law demonstrate a government policy of national sovereignty, in that it is trying to ensure that the country’s natural resources remain under national control.”

However, Dominguez also stated that: “it is all relative. The law plays a role in restricting businesses, but what we are now witnessing is that foreign capital is finding other ways to keep itself in the business, (…) so in some ways, the law is insufficient.”

With regards to what has happened in the country after the law was passed, Sabatino said that “land registry did take place, but it was not accompanied by any great commotion because land grabbing is not a very popular topic… the people it effects are very few.” Evidently there remains much to do to raise awareness.

Sabatino added that he and Dominguez are more focussed on the issue of land use, and less on the actual purchase of land. “What we are seeing in Argentina is capital investment in livestock production, and the subsequent exportation of this produce to the investor countries. It should be noted that the law does not limit the rental of land, so rental is one of the mechanisms used by foreign countries to keep themselves involved in production. According to Dominguez, “rents have grown substantially in recent years in Argentina”.

The acquisition of land is not only an economic issue, but also a political one, as it can put great restrictions on democracy. However, Dominguez explained that despite land control being historically associated with the processes of democratisation, landowners in Argentina have in fact always been capitalists. They have always been progressive, he said, though of course not in the sense of assuring the rights of the entire population.

“There have been various different stages in the process of land concentration in our country. Disputes between industrial and agricultural sectors have always existed, sometimes working together, sometimes not. In the task of democratising land, Peronism – as a process – came up against landowners and their interests in the appropriation of agricultural income, of capital income. Later in the 1990s, the landowner class had to make political concessions to ensure there was no transfer of rights. This was the point when other sectors entered the land acquisition business; transnational corporations linked themselves to the agricultural sector, and that is what can be seen today.”

I also spoke to the Colombian expert Bladimir Flavio Rodríguez Muñoz, who told me that the main similarity between Colombia and Argentina is the province of ‘Las Llanos’, the eastern plains of Colombia, which can be compared with the humid ‘Pampas’, a region that covers Brazil, Uruguay and Argentina. By chance, the same corporations and operations cultivating the eastern plains of Colombia are also working in these Argentine and Brazilian “high tropical plains, which were once ignored, but now in Brazil’s case serve as the country’s breadbasket”.

In the specific case of Colombia – which has been plagued by a low-intensity armed conflict since the 1960s – a military offensive has weakened the guerilla group FARC, which has in turn improved security in Las Llanos, consequently rendering the land more productive. The aim of Colombian authorities is to cultivate the area for the production of palm oil, corn, soybeans, rubber trees and other crops similar to those grown in the Brazilian ‘Pampas’. However, scandals have emerged over foreign involvement. A major recent scandal involves Cargill Inc., an international producer and marketer of food that has entered into a transaction in the area that may have violated a Colombian law in place to preserve small farms. The government has responded to the scandal unenthusiastically to say the least, so there are now doubts surrounding the credibility of its commitment to land reform.