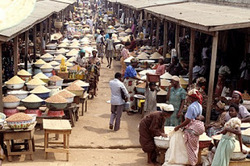 The Lagos State government has recently acquired land in Shongai, Benin Republic as part of effort to increase arable farmlands beyond the state’s boundaries for food production.

The Lagos State government yesterday said it has acquired 1,000 hectares of land to boost rice production in the state. The state government is stepping up increase in arable farmlands beyond the state’s boundary aimed at boosting food production.

To this end, it had recently acquired land in Shongai, Benin Republic and 84 hectares of land in Osogbo, Osun State and 50 hectares of land in the Federal Capital Territory, FCT Abuja. Governor Babatunde Fashola who made the disclosure also told residents that his administration had embarked on several sustainable programmes that would boost the food production in the state.

Speaking during the 2013 World Food Day held at the LTV8 Blue Roof, Agidingbi, Ikeja, Lagos, Governor Fashola said the cassava factory has the capacity to produce 1800Metric Tonnes per anum, saying about 7,200 Metric Tonnes of cassava tubers is required to be planted on 500 hectares of land which is expected to yield 20 tons per hectares.

Describing the theme of this year’s celebration , ‘Sustainable food system for food security and nutrition’, relevant to his administration’s mission for the agriculture sector, the governor assured that more programmes would soon be initiated to achieve sustainable food production in the state.

He also used the occasion to re-launched the Young Farmers Club, aimed at encouraging students in the state participate in the agricultural development activities. Governor Fashola who was represented by the Commissioner for Science and Technology, Mr. Adebiyi Mabadeje, also disclosed that the state contribution in the Commercial Agriculture Development project, (CADP), a World Bank assisted project, has increased from N332.675 million to N667 million.

According to Governor Fashola, “We have acquired 500 hectares of land at Eggua in Ogun state and we have secured the release of another 500 hectares from the Ogun- Osun River basin Authority at the Itoikin axis for rice production.”