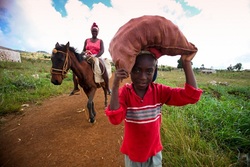 They felt that lax laws were allowing rich foreign corporates to displace the poor to pave way for mining, game reserves, golf estates and agricultural activities in pursuit of their own profits.

Durban-based Catholic Cardinal Wilfred Napier, who was part of the workshop, said poor people seemed to have lost importance in the eyes of their governments and the corporates.

Napier said the poor only gained prominence during election times and were conveniently forgotten immediately thereafter.

This is according to a statement released by KwaZulu Natal Christian Council chairperson Bishop Mike Vorster.

And one of the common issues which continued to emerge from presentations of participating countries is the governments' slow pace or reluctance to protect people's land rights.

The 30 participants shared experiences showing that tenure systems in all southern African countries were open to abuse and misuse by political elites, multi-corporates and traditional authorities

The participants strongly urged church leaders to redistribute church land and seek experts to offer advice on use of church land for food production and job creation.

Participants appealed to African parliaments to come up with laws that protect land owners, promote land rights and to criminalise massive land grabbing.

Zambia was represented by Zambia Land Alliance and Caritas Solwezi.