The Netherlands and the global land and water grab 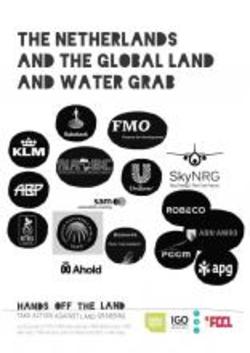 The Netherlands and the global land and water grab

Dutch pension funds, banks and corporations - and even the government - are implicated in the new wave of land and water grabbing worldwide. This briefing exposes the key players and makes recommendations to prevent further abuses.

The Netherlands and the Global Land and Water Grab (PDF 683.07 KB)

This briefing examines the involvement of The Netherlands in global land and water grabbing. In particular it explores two tendencies:  i) direct financing by Dutch investors in large-scale land transactions; and ii ) the Dutch government’s endorsement of various corporate self-regulation schemes, investment codes, development and trade policies which have created an enabling environment for large-scale land deals to occur. The briefing ends with a set of concrete demands and recommendations directed towards the Dutch state and private investors to stop their involvement in land grabbing and respect the Right to Food.

One of the big questions this briefing addresses is when does a land deal or investment by Dutch investors turn into a land grab. In the absence of any consensus on what constitutes responsible investment, how it can be monitored, and how it should be enforced, the distinction between a productive ‘investment’ and an illegitimate ‘grab’ is not so clear.  The Hands off the Land (HotL) coalition believes that land grabbing is the capturing of decision making power over land and other associated resources like water, minerals or forests, in order to control the benefits of its use. In this context and as the particular case studies in this briefing highlight, land grabs are frequently 'legal', sometimes carried out 'transparently' and may even be regulated.  For Dutch corporations and the government to rely on voluntary self-interpreting and self-regulating codes of conduct does therefore not safeguard communities from experiencing a land deal as a 'grab.' Their experiences of dispossession are why the HotL coalition believes it is critical to have an in-depth discussion about the desirability of particular types of investment and the model of development that underpins them.