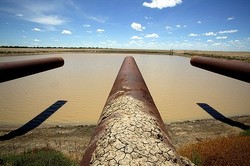 Australian Farms Fund Management positioned itself to exploit the flow of investors into Australian agribusiness by sealing a tie-up which is handing it management of the giant Cubbie Station cotton farm.

Australian Farms Fund Management, best known for running the Sustainable Agriculture Fund, revealed that it agreed to sell a 40% stake to Melbourne-based Lempriere Capital, the agricultural investment management group which traces its history back 190 years.

The deal will dilute to 48% the stake in Australian Farms Fund Management owned by Mike Fitzpatrick, with the remainder owned by managers.

However, AFFM - which manages some Aus$150m in Australian and New Zealand grain, beef and dairy operations through the Sustainable Agriculture Fund - will gain management of Cubbie Station through the deal, taking total assets under its control above Aus$500m.

It has also positioned itself to tap the wave of investment into Australian agriculture - highlighted by the purchase by US-based Archers Daniels Midland of grain hander GrainCorp, but also including plans by Indonesia to invest in beef, besides domestic investment.

Mr Fitzpatrick, terming the long-term outlook for Australian agriculture investment as "very positive", said that the deal had given AFFM the "capability to match investor needs with investment product design."

"This group has the opportunity to open up this asset class to a range of institutions or private investors who previously found it difficult to invest with confidence," he said.

At Lempriere, the investment management group's chief managing director, Tony McKenna, said that the enlarged AFFM "can lead the acceptance of agriculture as an asset class in Australia".

However, Mr McKenna focused on domestic investment, saying that deal created "an opportunity to encourage Australian investors to invest in Australian agriculture".

Chinese investment in foreign farming is a touchy subject in many countries, given China's huge needs as an importer or agricultural commodities, and in Australia was permitted by the government on condition that Shandong cut its 80% interest to no more than 51% within three years.

Cubbie Station, which produced more than 230,000 bales of cotton at the latest harvest, has itself attracted controversy for its huge pull on water within the Murray Darling river system, in a country with a history of periodic droughts.

The property's irrigation system can hold 539bn litres of water, more than the volume of Sydney Harbour.

A large agricultural investor says Australia is entering an era of institutional investment in farming.

Sustainable Agriculture Funds (SAF) has superannuation money in a $150 million portfolio of dairy, beef, cotton and grain cropping across Australia.

Australian superannuation firms like Auscoal, Catholic, Christian, AMP and Melbourne University are all investors in the Sustainable Ag Fund.

The investments have only been delivering single digit returns until now.

But the fund's chief executive John McKillop says Asia's need for more food is driving up the interest.

"I think it just takes a patient investor, which is historically the family farm.

"They are more patient, they know the returns aren't steady year on year.

"We've just got to find the right institutional investors who are willing to accept those returns are going to be slow or negative in some years, but ultimately they are a solid performer."

AFFM now has a combined $500 million under management, given its role as manager of Cubbie.

"You must remember a lot of the food security issues have been driven not by Australia but overseas investors, thinking that in the future it will become a critical part of the global production scene.

"In Australia, we haven't seen that boom quite flow through yet."

While SAF hasn't yet invested in food production or processing, Mr McKillop says it's considering the move.