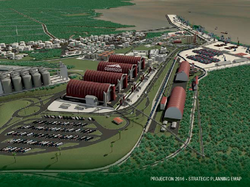 According to a statement issued by Sojitz: "Sojitz and CGG group aim to expand agricultural land ownership to 200,000 ha and grain volume handled by the CGG group to 6 million tons annually starting in 2020 . . . [Sojitz will] sell those grains in Japan and other Asian markets as well as in China, which imports 70% of the world's soybean trading volume." Above, projected view of the Port Terminal in Itaqui upon completion.
By Yuriy Humber

Sojitz Corp. (2768), a Japanese trader that earns a third of its profit from consumer goods and services, will invest in a Brazilian grain harvester and collector to tap food demand in Asia.

Tying up with Cantagalo, which plans to triple its grain handling volumes by 2020, should help Sojitz boost its own annual grain trade to 10 million tons in the same period, the Japanese company said. It didn’t specify its grain volume.

To make the Brazil project a success, Sojitz and its local partner will also help build the Itaqui port in northern Brazil, the company said. Most of Brazil’s grain is exported from the nation’s southern ports, which have become congested, Sojitz said.

To contact the reporter on this story: Yuriy Humber in Tokyo at [email protected]

To contact the editor responsible for this story: Jason Rogers at [email protected]