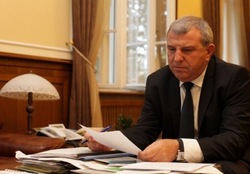 Bulgaria's agricultural land plots are not so attractive as to be purchased in mass or bought out by foreign citizens, according to the Minister of Agriculture, Dimitar Grekov.

"My personal opinion is that there is no extreme danger whatsoever of foreigners invading our lands, because they are not consolidated and merged," commented the Minister of Agriculture on Nova TV on Saturday.

"Consolidation as a process that has been missed a long time ago," he added.

According to Dimitar Grekov, lands, divided into parcels of 5-8 decares, are of no interest for purchase from foreign farmers.

"The Foreign Affairs Parliamentary Committee examined the moratorium on the purchase of agricultural land by foreigners, proposed by the nationalists, and it was rejected," said Grekov, remainding that in most of the countries where there is such moratorium, the deadline for it being effective is December 31, 2013.

"Climate change and problems with irrigation further contribute to the unattractiveness of agricultural land in the country," he stressed.

"You see the situation in many agricultural countries where there are top-notch irrigation facilities and in our country, which has so many problems with irrigation. Why would a farmer from another country come here when he cannot count on irrigation? Moreover, our agricultural production is a high cost," said the Minister of Agriculture.