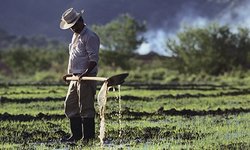 A Colombian rice farmer. Millions of hectares of land have been abandoned or stolen since 1991. (Photo: Jeremy Horner/Corbis)

The threats against Sifredy Culma's life come in many forms: suspicious men on motorcycles circling his neighbourhood; a flyer slipped under the door declaring him a "military target"; a menacing phone call warning that he will be killed if he tries to reclaim the plot of land he abandoned when rightwing paramilitary militiamen stormed into his town in Colombia.

The intimidation started in 2010, when Culma began collecting signatures from other farmers who had fled the village of Santafe and been forced to sell their land under threat from the paramilitaries. Culma is reclaiming that property as part of an ambitious government programme to return abandoned or stolen land to millions displaced by the country's half-century-old conflict.

Two hours after he filed the first claim, gunmen from the Rastrojos – a paramilitary-style criminal band that operates in the region – went looking for Culma to kill him. He had already left town. Since then, the threats of violence have not let up. In 2011 a warning came through on his mobile. "I was told that if I kept insisting on claiming our land, I would end up like other land claimants in the country," he said. Culma understood the message: by that time at least a dozen people leading land claims had been killed.

The struggle for land has been a cause and consequence of five decades of conflict in Colombia, where 52% of rural property lies in the hands of just 1.15% of landowners, according to the United Nations Development Programme.

A lukewarm attempt at land reform in the 1980s led to a violent backlash and the rise of paramilitary forces, who in addition to fighting leftwing guerrillas and engaging in extortion, drove hundreds of thousands of peasants from their homes. Around 23,000 sq miles of land have been stolen or abandoned since 1991. Much of it has ended up in the hands of national and international agribusiness or mining concerns, former and current combatants, or farmers with close relations to the armed groups responsible for the clearances. Experts call it a "reverse land reform".

Those who, like Culma, are trying to reclaim that land face violent reprisals. "In Colombia, trying to get your land back often means assuming risk and living in fear," said José Miguel Vivanco, Human Rights Watch director for the Americas. A new report from the organisation documents 21 murders since 2008 in which researchers found "compelling evidence" that the attacks were motivated by land claims. Dozens of other cases suspected of being related to land claims are under investigation, and hundreds of people have received credible death threats.

Culma now lives in a cramped house in the city of Valledupar, while part of the land in Santafe he is trying to reclaim is reportedly being used by Prodeco, a subsidiary of the Swiss mining giant Glencore Xstrata, to dump mine waste from the nearby Jagua coalmine.

Nostalgia washed over Culma's face when he looked at a photograph of himself taken about 20 years ago in a rice field he planted in Santafe after Colombia's land reform agency, then known as Incora, granted him and 29 other families ownership of the land in 1991. (The original owner had sold off part of his estate to Incora in 1987 after refusing extortion demands from leftwing Farc guerrillas.) Now that plot is planted with palm trees – reportedly part of the mine's plan to mitigate its environmental impact. Prodeco failed to respond to repeated requests for comment.

The land was not stolen outright: back in 1997, Culma and 18 other peasants were coerced into selling at rock-bottom prices after the paramilitaries had driven them away. They knew they had little choice: one farmer who sold to someone else was killed days later by paramilitary fighters.

Culma said there was no evidence that the threats were coming from Prodeco. "There are a lot of different interests here who don't want to see us get our land back," he said.

Ricardo Sabogal, national director of the government's land restitution office, said the Colombian government knew from the outset that the process "was going to step on some very powerful toes and affect dark interests".

Claimants who are threatened are offered protective measures: Culma was provided with sporadic checks by a police patrol, a mobile phone, a bulletproof jacket – which he doesn't wear "because it makes me more visible" – and a bodyguard, whom he didn't trust and had removed. "At this moment, my bodyguard is Jesus Christ," said Culma.

And the threats keep coming.

Earlier this year a flyer called on him and other land claimants in Cesar province to give up the "subversive practice" of reclaiming land. "It doesn't matter if you are protected now: the moment you let your guard slip, we will fight you," read the threat, signed by the Urabeños, another neo-paramilitary group.

The underlying problem, according to Human Rights Watch, is that, while the bodyguards and bulletproof vests can deter murderers, only serious investigations into threats and murders and the conviction of attackers will stop the intimidation. "Meaningful protection will require holding the attackers accountable and breaking the grip paramilitary mafias still have in areas where displaced families are trying to return," said Vivanco.

On 8 October, authorities announced the capture of Sor Teresa Gómez, one of the last surviving members of the Castaño family, which founded paramilitary groups across northern Colombia. Gómez, described by President Juan Manuel Santos as a "symbol of terror", was convicted in absentia and sentenced to 40 years in prison for the 2007 murder of Yolanda Izquierdo, an activist who had led claims to recover land stolen by the Castaños.

Colombia has launched the restitution effort before its civil war has ended. The government is engaged in talks with Farc guerrillas in Havana, in what is considered the best chance yet to find peace. But fighting continues at home and criminal gangs that emerged from a faulty paramilitary demobilisation process a decade ago continue to impose violent control over certain areas.

Despite the volatile backdrop, more than 43,500 claims have been filed for 11,000 sq miles since the programme began in mid-2011. The government has given itself 10 years to ensure the return of all the stolen and abandoned land, but many claimants are anxious about the slow pace of the process.

"So I'm supposed to walk around with a bulletproof vest for 10 years while my land is returned?" asked one claimant, who requested anonymity.

Despite the constant threats and slow progress of the restitution programme, Culman said he would continue to fight for his land. "I haven't thought about giving up," he said. "If I have to give my life for this, I will."

As the government tries to reverse the land grabs of the past decades and to end the conflict that enables them, violent protests by farmers have reminded the nation that the needs of the rural sector go beyond ending the fighting.

Hundreds of thousands of rice and potato farmers, milk producers and coffee growers nearly paralysed the country with roadblocks and marches at the end of August and in early September in protest at the low prices their products fetch, the high cost of seeds, fertilisers and pesticides, and the lack of support for small-scale agriculture.

"We've been ignored for too long," says José Libardo Valencia, who farms potatoes and flowers and produces milk on his farm, in the town of La Unión in Antioquia province. "The government thinks the Farc are the main problem in the countryside, but they are a secondary problem," he adds, referring to the leftwing rebels who rose up against the state nearly 50 years ago demanding social justice.

The government of President Juan Manuel Santos is engaged in peace talks with the Farc to end the war. After 11 months of negotiations, the one point the two sides have agreed on is rural development and agricultural reform.

But one of the many messages of the protests is that the guerrillas do not represent the interests of Colombia's peasants. "The real problem is the injustice in the countryside. Policies favour big agribusiness and have forgotten the small farmer," says Valencia.

Their anger has been fuelled by revelations that large national and multinational companies have been circumventing the few policies aimed at protecting small farmers by buying up large areas of farmland originally earmarked for land reform. A recent Oxfam investigation found the US food giant Cargill had set up shell companies to buy up as much as 30 times the legal limit for one company.

Alejandro Reyes, a land expert who acts as a consultant for the agriculture ministry, and who was involved in negotiations with Farc guerrillas on the issue of rural development, says the recent protests represent a "shift from an armed conflict to multiple social conflicts that were repressed for so many years because of the war".

After initially downplaying the importance of the protests, and claiming the demonstrations had been infiltrated by guerrillas, the government got the message. "The crisis is the product of decades of neglect of the countryside," Santos said in a speech. He changed the agriculture minister and called for a national "agrarian pact" to dictate from the bottom up the best model to follow for the rural sector.

The economist Albert Berry, a professor at the University of Toronto who has studied Colombian land issues for decades, says Colombia can ill afford to improvise any longer with its policies for the countryside. "This may be Colombia's last chance to rectify the injustices of the rural sector," he says.