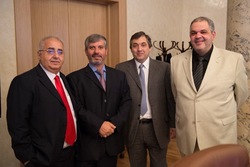 Mikhail Orlov (second right), founder of Black Earth Farms, was among the first to start attracting funds from foreign investors into Russia's agricultural market. Orlov then shifted focus to Zambia with his new company Ambika Agro, but has now returned to Russia to build a 4,800 cow dairy farm in Chechnya. (Photo: Press Photo)

Mikhail Orlov — having set up the Black Earth Farming (BEF) agricultural business to grow wheat, and having sold it a few years ago to outside investors — has come up with a new project. This time he will focus on dairy farming. The businessman has already gone over all the details with the Chechen authorities and plans to build four dairy compounds for 4,800 dairy cows right in Chechnya.

Mikhail Orlov was among the first to start attracting funds from foreign investors into Russia's agricultural market, through his company BEF. In 2007, he held an IPO of the farming business on Stockholm's stock exchange.

As for BEF's offshoot, Agroinvest, it became one of Russia's largest proprietors, with as much as 815,450 acres of land. One year later, Orlov decided to quit that business. From that moment on, he began investing his money in Zambia, leaving himself a small farm in the Kaluzhskaya region.

This past spring, Chechen officials contacted Orlov and offered him the chance to start up a dairy business in their republic, Orlov told RBK daily. “The people who took part in our negotiations are truly forward-minded and professional,” he says.

“During our first meeting, we understood each other completely and decided under which conditions we were going to work. There were no empty phrases: They told me what they could offer and what they would need in return.”

In late September, Orlov’s Ambika-Agro company and the Israelian LR-Group, in conjunction with the Ministry of Agriculture, signed an agreement with Chechen officials concerning the creation of a dairy cluster in the Gudermesskiy region. This project is bound to supply the republic with large amounts of high-quality milk, Orlov has stated.

According to Orlov, the project will start in one region, and it may expand into others later. The first step is to build a dairy farm big enough to fit 1,200 dairy cows; afterwards, there are plans to expand the farm to accommodate 4,800 cows. 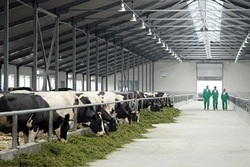 Businessman Mikhail Orlov plans to expand the farm to accommodate 4,800 cows. (Photo: PhotoXPress)
Orlov did not reveal the total amount of investment for the project, but experts say that one cattle stall costs a minimum of 500,000 rubles ($15,600). Therefore, investment in this project could reach about 2.5 billion rubles ($75 million).

“This is not a new experience for me,” Orlov says. “I have worked in the dairy cattle business in Agroinvest. Right now, there are approximately 600 cows on my farm in Zambia.”

Orlov is not afraid of the complications that have formed in Russia's dairy cattle business: Since the beginning of the year, the gross output of milk has decreased by five percent, and cattle stock is also gradually decreasing. “Yes, the issue is quite serious, but all we have to do is work to the highest standard,” the businessman says positively.

In February 2013, the Chechen government sanctioned a regional program of dairy-cattle business development for 2013–2015. According to the program data, there were 109,100 cows in the republic in 2012 and total milk production was at 261,200 tons.
Special Project: Top Russian start-ups

In different agriculture organizations, one cow's milk-yield reaches 8,520 pounds. By comparison, according to the Ministry of Agriculture, the average milk-yield of a cow is 9,970 pounds in Russia.
The republic's officials say that the gross output of milk should increase to 296,600 tons, whereas the livestock should increase up to 115,000 cows.

“For investors who have money and enough patience to wait for profits, now is the time to invest in the dairy business,” says the CEO of Souzmoloko, Andrei Danilenko. Orlov wants to carry out this project in a region where there is a serious deficit of milk, but, according to Danilenko, there are also serious financial recourses there, thanks to the help of the federal budget.
First published in Russian in RBC Daily.