What does Ukraine stand to gain from farming deal with China? 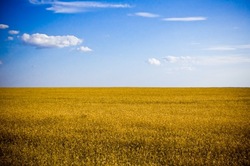 What Does Ukraine Stand to Gain from Farming Deal with China?

A deal signed between Ukrainian and Chinese authorities last month may impact up to 3 million hectares of prime farmland in Eastern Ukraine, a space roughly the size of Belgium. China, the world’s largest country, with over 1.35 billion inhabitants, consumes 20% of the world’s food supply, but constitutes only 9% of the world’s farmland. As the country quickly industrialises, increasing amounts of farmland are being appropriated by authorities for industrial use. As a result, the Chinese are looking elsewhere for farmland to sustain its growing population.

It was only last year that the Ukrainian government lifted a law that barred foreigners from buying land in Ukraine, paving the way for this monumental project. Under the deal signed between China’s Xinjiang Production and Construction Corps (XPCC) and KSG Agro, a Warsaw-listed Ukrainian agricultural company, crops raised in the region concerned, the Eastern province of Dnipropetrovsk, will be sold at below-market prices to two Chinese state-owned firms.

For its part, China will invest $2.6 billion in the Ukrainian agricultural sector for rights to the crop yield for 50 years. Additionally, China’s Export-Import bank promises to make significant infrastructural investments and China will provide human and material inputs (workers, seeds and fertilizer…).

Such deals are increasingly common between capital-intensive countries looking to outsource food production to countries with land to spare. According to a report published in June of this year by the Transnational Institute, the regions concerned by these purchases include Africa and, to a lesser extent, Eastern Europe, Latin America and Asia. In total, it is estimated that between 0.7% and 1.75% of the world’s farmland is being transferred from locals to foreign investors.

The deal with Ukraine is not the first of its kind for China. In 2010 and 2011, China purchased farmland from Sudan and Tajikistan, but the area concerned, just over 500 hectares combined, pales in comparison to the current deal. Elsewhere, China has also made substantial agricultural investments, notably in South America, where Beidahuang acquired 234,000 hectares to grow soya bean and corn in Argentina and Chongqing Grain paid $1.2 billion for land in Argentina to grow soya beans, corn and cotton.

Such deals have been highly contentious. Supporters argue that they provide new seeds, techniques, technology and, above all, investment for agriculture in countries that have long suffered from chronic underinvestment. On the other hand, opponents call the projects “land grabs”. They are concerned that projects will be insulated from host countries and push poor farmers off their land. Foreign farming projects often conjure up memories of “banana republics”, dictatorships whose economies were dominated by foreign-owned fruit plantations.

In Ukraine, a country once referred to as Russia’s breadbasket, geopolitical calculations certainly play a part in the decision to partner with China. The country is attempting to distance itself from Russia, building stronger ties with the EU, with whom it is set to sign an ambitious Association Agreement next month at the Vilnius Eastern Partnership summit, but Kiev is also reaching out to other partners. Ukraine and China have notably set up an Intergovernmental Commission on Cooperation, as well as several subcommittees, with the goal of intensifying bilateral trade and economic cooperation between the two countries.

The country’s agricultural sector will no doubt benefit from the much-needed investment, but there are some legitimate concerns that it is Ukraine’s farmers that will ultimately lose out. China traditionally sends its own human resources for large-scale foreign farming projects. According to one estimate, one million Chinese labourers currently work in Africa on farming projects.