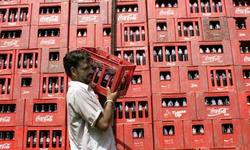 Sugar rush – a worker carries a crate of Coca-Cola at the local dealer in Jammu, India. The soft drinks producer is the world’s largest buyer of sugar. (Photo: Reuters)

Coca-Cola, PepsiCo, Associated British Foods and other global food and beverage companies are being urged to establish a zero-tolerance policy on land grabs.

In its report, Sugar Rush, published on Wednesday, Oxfam said sugar, along with soy and palm oil, was driving large-scale land acquisitions and land conflicts at the expense of small-scale food producers and their families.

"This is the first time we have focused on land, and targeted food and beverage companies using the lens of sugar," Erinch Sahan, the charity's private-sector policy adviser, said. "They have a huge amount of power and the three biggest players are a critical group."

Sugar is a key ingredient for food and drinks companies: 51% of sugar produced ends up in processed foods including soft drinks, sweets and ice-cream. It uses the most land for food production – sugar is grown on 31m hectares, an area the size of Italy. There have been 100 recorded large-scale land deals for sugar production occupying at least 4m hectares of land since 2000.

Demand for sugar is expected to rise by 25% by 2020. The industry is dominated by a handful of traders, with Bunge, Cargill, Czarnikow, ED&F, Louis Dreyfus, and Sucden accounting for about two-thirds of the world trade.

In 2011, the global trade in raw sugar was worth $47bn (£29bn). Of that $33.5bn-worth of exports came from developing countries. Yet in spite of the risks of land conflicts associated with sugar, soy and palm oil production, a lack of transparency by food and beverage giants makes it difficult for the public to hold companies accountable, Oxfam says.

"Most of the biggest food and beverage companies do not even disclose how much sugar they buy or the countries they buy it in, let alone the names of their suppliers or the social and environmental impacts of their sourcing," it added.

PepsiCo and Coca-Cola strenuously deny any involvement in land grabs. A spokeswoman for Coca-Cola told Associated Press: "Through our sustainable agriculture guiding principles, we are asking our suppliers to recognise and safeguard the rights of communities to maintain access to land and natural resources.

"We are working to promote respect for human and workplace rights by the farm and the employer of workers at the farm, whether or not the employer is the farm itself."

But Sahan said the companies should be asking questions about the land where sugar is grown. "They should be engaged on the issues," he said. "Was there consultation, compensation, or a negotiating process?"

The Oxfam report cites the Brazilian state of Mato Grosso do Sul as a region where the clash between the sugar industry and the indigenous population has been particularly dramatic, involving the indigenous Guarani-Kaiowá, who have struggled to reclaim their land for the past 30 years.

Large sugar cane farms cover most of the land the Guarani-Kaiowá community once relied upon for fishing and hunting. Bunge says it intends to continue to buy sugar cane from farms located on the indigenous land; Coca-Cola, the world's largest buyer of sugar, purchases sugar from Bunge in Brazil.

"Bunge's use of sugar grown in indigenous territory offers a clear rationale for Coca-Cola to strengthen its requirements for how its suppliers address land rights to avoid conflicts," Oxfam said.

As part of its Behind the Brands campaign, Oxfam tracks 10 of the world's biggest food and beverage companies to assess their policies and commitments on issues including women, small-scale farmers and climate change.

Land is the one in which the companies score the worst, according to Oxfam. The charity says none of the "big 10" has adequately addressed the major risks of land grabs or conflicts over land that may be happening in their supply chains.

Nestlé ranks top on land, scoring five out of 10. Associated British Foods, which owns its sugar production operations and the Silver Spoon brand in the UK, scores only one on land, along with Kellogg's, General Mills and Mondelēz International (formerly Kraft Foods).

Oxfam said a zero-tolerance approach on land grabbing should acknowledge company responsibility for land rights violations involving the company or its suppliers down to the primary producer, and adherence to the principle of free, prior and informed consent. Meanwhile, governments and traders should commit to the voluntary guidelines on the responsible governance of tenure of land.