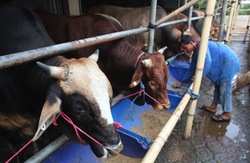 A seller feeds cattle as he awaits buyers on a street in Jakarta, Indonesia, on September 26, 2013. (EPA Photo/Adi Weda)

Australian Prime Minister Tony Abbott on Tuesday threw his support behind Jakarta’s plans to invest in Australian cattle farms to help end a trade dispute that has devastated his country’s cattle industry and boosted beef prices in Indonesia.

Abbott’s comments came on the final day of an official visit to Indonesia, his first overseas trip as prime minister, in which he was keen to focus on strengthening trade and business ties and move on from tension over refugee boats.

Indonesia has said it could buy up to 1 million hectares of Australian farmland for cattle grazing, to improve future supplies and keep prices stable under a long-term plan to be self-sufficient.

Beef trade has been a contentious issue in the past. In 2011 Australian live cattle exports to Indonesia were briefly suspended after Australian television broadcast images of cruelty in an Indonesian abattoir.

“If some Indonesian joint ventures in cattle are an important part of getting this trade re-started, well, please bring them on, bring them on,” Abbott said.

Tighter scrutiny aimed to show Australians how investments were good for the country, Abbott said in his first comments on the issue.

Indonesia relaxed quotas on Australian beef imports in May and Jakarta has since outlined plans for state enterprises to invest in Australia’s cattle industry.

Abbott told business leaders in Jakarta he wanted to boost trade with Indonesia at a time when tension over asylum-seekers has threatened to overshadow his trip. Trade between the neighbours stood at $10 billion in 2012.

Abbott was accompanied by a 20-strong delegation of bankers, mining chief executives and agricultural barons to highlight Australia’s willingness to expand bilateral trade.

As disposable incomes rise in Southeast Asia’s largest economy, Australia’s businesses are keen to cash in on the demand from Indonesia’s burgeoning middle class.

Abbott identified several sectors for investment, from infrastructure to education and financial services.

Some Australian business people lauded Abbott’s efforts, but said Indonesia could do more to improve its investment climate.

“But the reality on the ground is often different and boards back in Australia are often not as confident or comfortable about investing here … because of legal uncertainties and bureaucracy.”

Abbott played down diplomatic tension over refugees in a joint statement on Monday with Indonesian President Susilo Bambang Yudhoyono.

“Of course we stand by our policies. But above all else, we want to work effectively to stop the boats,” he said on Tuesday, adding that Australia would work with Indonesia.