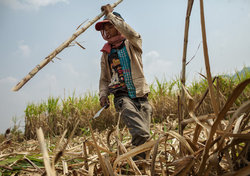 Activists have called for the exclusion of Cambodian sugar from duty-free treatment in Europe, saying that it triggers corporate land grabs. Above, a worker harvesting sugar at a Phnom Penh Sugar plantation. (Photo: Thomas Cristofoletti)

OMLIANG COMMUNE, Cambodia — Yim Lon nurses bitter memories of how three years ago the local authorities forced her and her family to dismantle their small home and move it to make way for a sugar plantation.

The Phnom Penh Sugar Company paid her a few hundred dollars, less than a tenth of what Ms. Yim, 53, says she believes the family’s small plot of farmland was worth. She dreams of being allowed to move their two-room house, made of wood planks and steel siding, back to the site near a stream where they used to grow rice. She is convinced that the other culprits are the Europeans, who buy sugar from Phnom Penh Sugar. “If Europe continues buying sugar from the company, then we will continue suffering,” she said.

Phnom Penh Sugar says that it has behaved fairly and obeyed local laws. Newly created sugar plantations across Cambodia have created thousands of cash-paying jobs for destitute migrant workers and subsistence farmers, and hundreds of jobs for skilled factory workers.

But the corporate practice in Cambodia of obtaining tens of thousands of acres from the government as economic development concessions for large sugar plantations, while paying modest compensation to farmers pushed off the land, places a harsh light on international trade pacts that are meant to help the world’s poorest countries.

To many activists who have heard the tales of people like Ms. Yim, the trade pacts that foster exports can have the unintended effect of encouraging land grabs by wealthy, politically connected families.

Nearly all of Cambodia’s sugar exports go to the European Union under the Everything But Arms program, which eliminates import duties for the sugar. The European Union also sets high minimum prices for imported sugar, well above world levels. Western activists have tried in recent months to organize consumer boycotts against companies that have bought Cambodian sugar, notably Tate & Lyle Sugars, which is owned by American Sugar Refining of West Palm Beach, Fla.

The European Union has held high-level talks with Cambodian officials about the sugar issue. But it has refrained so far from opening a formal investigation into whether Cambodian sugar should lose duty-free access to the European Union.

In a written response to questions, Ambassador Jean-François Cautain, the head of the European Union’s delegation to Cambodia, pointed to statistical measures. Rising exports helped Cambodia triple average annual income per person in the last decade, to $980, while reducing poverty to a fifth of the country’s population, he wrote. “We also need to consider the benefits the overall Cambodian economy gets from the ‘Everything But Arms’ scheme and the harm the country would suffer if we remove it,” he wrote.

Western and Cambodian activists have called for the exclusion of Cambodian sugar from duty-free treatment in Europe, saying that it triggers corporate land grabs.

“The land is deeply connected to the spiritual life of the people,” said Chum Narin, the land and natural resources program head at the Community Legal Education Center, a nonprofit group in Phnom Penh.

American Sugar Refining said that its Tate & Lyle unit had bought only two “small shipments” over the years from Cambodia. The first was in May 2011 and the second in June 2012, the company said. It also said that it “has not received Cambodian sugar for over a year and has no plans for further purchases.”

Both of American Sugar’s purchases were from the KSL Group, another company producing sugar in Cambodia. Phnom Penh Sugar said that it sold sugar to businesses in Spain and Italy, but it declined to identify the buyers.

Sugar represented only $25.2 million of the $1.34 billion in Cambodian products that the European Union bought in the first six months of this year. Most of the European imports from Cambodia are garments.

But the developing sugar industry has created jobs chopping sugar cane for previously destitute migrant workers from hill villages even poorer than Omliang Commune. Sugar refineries have also brought multimillion-dollar investments, roads and other amenities to remote areas where investors have long feared to venture in an oftentimes chaotic country like Cambodia.