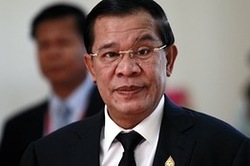 Activists are skeptical that Cambodian Prime Minister Hun Sen will follow through on a pledge to stop a contentious practice of appropriating rural land for commercial use, an issue that hurt the leader and his party in elections in July.

In its new five-year political platform issued last week, the Cambodian government pledged to suspend new issuances of “economic land concessions”—a controversial program that was aimed at boosting agricultural exports but blamed by rights groups for a “land-grabbing crisis”—and conduct a review into existing concessions.

The platform formalized a May 2012 moratorium on land-concession issuances ordered by Mr. Hun Sen. The move, according to the 61-year-old prime minister, would help meet the “needs of the people” by protecting Cambodia’s natural resources, and boosting “sustainability of the environment and socio-economic development with the halting of destruction of forest land.”

Activists, however, aren’t convinced, saying that while the moratorium was laudable in theory, concrete action has been elusive so far.

“Skepticism is appropriate. Hun Sen has made ritual and unfulfilled promises over the years about land,” Brad Adams, Asia director at U.S.-based Human Rights Watch. “This announcement is no different and will have no impact on the crisis.”

Activists say the Cambodian government’s freewheeling issuance of land concessions has denuded large swaths of forests, robbed rural communities of their livelihoods and vitality, and could undercut the country’s fragile development. Already, officials have transferred control of 2.6 million hectares of land to private business from mostly subsistence farmers, according to rights groups, affecting 700,000 people and 73% of the country’s arable land in the past decade.

The problem mirrors land conflicts seen elsewhere in Indochina, such as in neighboring Myanmar and Vietnam, where rural residents have also tried to resist what they call unfair government efforts to appropriate land for commercial use.

Cambodian officials have defended the land concessions as integral to economic growth in one of the world’s least-developed countries. Although Cambodia’s economy has grown at an average annual rate of more than 8% over the past decade, about 30% of its population still lives below the national poverty line, spending below 61 cents a day, while foreign aid provides roughly half of the annual budget of about $3 billion.

Agriculture accounts for more than a third of the economy, and the sector is expected to expand by 4% this year, according to the Asian Development Bank. Part of this growth stems from economic land concessions, typically issued on terms of up to 99 years to agribusinesses growing cash crops like rubber, oil palm and cashews.

“Too many concessions have gone to insiders more interested in land-flipping or logging than in developing plantations,” said Douglas Clayton, chief executive at Leopard Capital, a private-equity firm that invests in frontier markets. “Huge swaths of Cambodia’s farmland and islands are tied up through unproductive concessions, constricting national development.”

Cambodian law bars officials from granting permits on protected land and cap concession sizes at 10,000 hectares. But rights groups and international observers, including the United Nations special rapporteur for Cambodia, have documented many instances where officials flouted these rules.

Officials have also regularly granted commercial leases to already-occupied plots, leading to disputes between concessionaires and rural residents, many of whom lack the necessary paperwork to press legal claims to their land. Rights groups say residents in such disputes were often offered too little compensation, or even forcefully evicted. The problem is partly a legacy of Cambodia’s Khmer Rouge regime, which outlawed private-property ownership during its radical Marxist rule from 1975 to 1979, leaving many people without land titles.

“The awarding process has never been transparent and facilitates lots of unofficial costs,”  Mr. Clayton said. “The government should introduce a public tendering or auction process instead of private deals, revoke concessions that fail to meet reasonable development schedules, and impose significant property taxes to discourage vacant land hoarding by speculators.”

Mr. Hun Sen, who has held power for nearly three decades, has in the past year taken steps to address some of these problems, including the May 2012 moratorium and a land-titling program, launched in December, to distribute 1.8 million hectares to rural residents.

But the moratorium doesn’t bar officials from granting concessions already “agreed in principle,” a murky area since there are no public records of such agreements. Furthermore, Cambodia’s land laws provide sufficient tools for curbing illegal issuances of land concessions, though enforcement is lax and state forces have sometimes assisted evictions and arrested protesters.

“If the government wants to be taken seriously it must take immediate action to end the ‘land grab’ crisis rather than just repeating old commitments which they themselves have already ignored,” said Josie Cohen, a campaigner on land issues at London-based environmental-advocacy group Global Witness.

On its part, the ruling Cambodian People’s Party said it would honor its latest pledge, particularly after suffering sobering setback in the July election, which the ruling party won with a sharply reduced parliamentary majority. The opposition had made land concessions a major campaign issue, pledging to revoke illegal leases and curb rural-land conflicts.

“What the [nongovernmental groups] say is based on their own assessment, but what Prime Minister Hun Sen has set in his policy is a real promise,” said Cheam Yeap, a People’s Party lawmaker and chairman of the parliamentary commission on finance, economy, banking and auditing.

“We will do more checks on economic land concessions and the Parliament will urge more action on this. The prime minister is also aware of the issue, and he will take strong actions against ministers who commit wrongdoing with regard to land concessions,” he said.

The July 28 vote, Cambodia’s fifth since the U.N. reintroduced competitive elections in 1993 after decades of civil war, marked the worst showing for Mr. Hun Sen’s Cambodian People’s Party since 1998.

The People’s Party won 68 seats in the 123-member parliament, but lost 22 seats compared with the 2008 election. The main opposition force meanwhile won 55 seats, adding 26 places to the 29 won by its constituent groups five years earlier. Political analysts attributed the vote swing to deepening disenchantment over rural-land conflicts, high youth unemployment and widening social inequity, as well as the ruling party’s inability to connect with a growing youth demographic.

Implementation “will be extremely difficult due to weak institutions and endemic corruption,” said Vann Sophath, a land-reform campaigner at the Cambodian Center for Human Rights. “The solutions will not happen overnight and will require strong political will.”

Sun Narin in Phnom Penh contributed to this article.