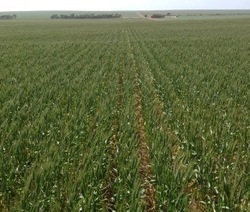 Wheat on a Chinese-owned farm near Hyden, Australia

A Chinese conglomerate has hit back at critics of its WA farming operations and vowed to press on with plans to invest hundreds of millions of dollars in an integrated supply chain from Albany to China.

The Chinese interests denied this year's cropping efforts had been a disaster as they prepare for a court battle with a Wheatbelt farmer and his wife.

A spokesman for Heilongjiang Feng Agricultural and Vicstock Grain said they planned to double the size of their farming operations in southern WA to 100,000ha next year and would only get "bigger and better".

The group's farm manager Jim Hutchinson and his team was responsible for 47,000ha over multiple farms owned or leased by HFA and Vicstock, which were backed by the Beidahuang Group.

Mr Hutchinson said they were set to deliver a respectable two tonnes a hectare average on their wheat and barley crops, and about 1.3t/ha on canola crops.

He said some of the farms had not been well maintained when they took control earlier this year. The first year of operation was always going to be a big challenge.

"The crops are not as bad as some people have made out," he said. "There will be problem paddocks on any farm but it is nothing out of the ordinary. We'll get this first year under our belt and next year will be a lot easier."

Mr Hutchinson's defence came after some local farmers derided the crops, with one saying they would be lucky to grow enough grain to feed the chooks.

HFA is also locked in a legal battle with Ian Tonkin and his wife Carolyn, who allege the company has failed to honour a contract signed two years ago to buy their farm for $8 million.

The Tonkin farm adjoins Connemara, the property at Lake Varley near Hyden where Mr Hutchinson is based. It was purchased through receivers after companies controlled by one of WA's biggest grain growing families collapsed.

The HFA spokesman refused to comment on the court case, but said the company was disappointed by criticism of its farming efforts and investment in WA.

Beidahuang began scouting out Wheatbelt farms more than two years ago. HFA completed the purchases of three farms - for $29 million, $23.2 million and $18 million - in a five-month period to the end of March.

The farms, between Lake Varley and Ongerup, cover 36,500ha and the rest of the Chinese operations are leased. The companies also financed the operations of up to five cash-strapped farmers to secure grain from this harvest.

Vicstock secured a 16-year lease on land and storage shed at Albany Port in March but is now seeking to renegotiate the terms with the port authority.

The spokesman said Vicstock wanted a longer lease and would not rush plans to build a storage and loading facility at Albany.

It now appears HFA and Vicstock will rely on the CBH storage, handling and port facilities for this harvest. The companies had planned to begin bulk grain exports from Albany to China early next year after an initial $10 million upgrade of the storage shed and a woodchip loader.