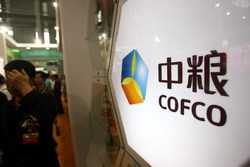 Wan Zaotian, vice-president of the State-owned food-processing giant COFCO, says the company will continue to expand through sugar and wine-related overseas mergers and acquisitions. "These two areas are easier for acquisitions compared with grain-related mergers," he said.

China National Cereals, Oils and Foodstuffs Corp, known as COFCO, will focus its overseas acquisition drive in the wine and sugar sectors to meet growing demand at home, a senior company official has said.

Wan Zaotian, vice-president of the State-owned food-processing giant, said on Thursday that the company will continue to expand through sugar and wine-related overseas mergers and acquisitions.

"These two areas are easier for acquisitions compared with grain-related mergers," he said.
Regarding grain M&A deals, he cited the example of land purchases in countries such as Brazil, which have ownership restrictions for foreign companies.

In November 2012, COFCO announced plans to invest in overseas M&A deals in the next five years, adding that companies in the United States, Australia and countries in Southeast Asia will be major targets.

In 2011, the company took control of Australian sugar producer Tully Sugar Ltd, but it lost a bid for Proserpine Cooperative Sugar Milling Association, another Australian company, in November of that year.

In the wine sector, the company bought Chateau Viaud in Bordeaux, France, in February 2011 after a previous purchase in Chile.

Meanwhile, Wan said that COFCO does "not exclude the possibility" of stepping up overseas M&A deals in the milk powder industry.

"It's quite unusual for a country to rely on overseas brands for 78 percent of its baby-formula supply," he said.

Yashili International Holdings Ltd, which is owned by China Mengniu Dairy Co Ltd of which COFCO is the largest shareholder, is building a factory in Waikato, New Zealand, with an investment of 1.1 billion yuan ($178.95 million) and an estimated annual production volume of 52,000 tons of milk powder.

Mengniu has already taken concrete steps to improve its milk sources, with 94 percent of its milk supplies now coming from large milk farms, according to Wang Yansong, assistant president of Mengniu.

However, Wang added that milk companies can't rely completely on their own dairy farms for milk supplies as the costs - especially land prices - would be beyond the means of the companies.

Song Liang, a dairy industry analyst at the Distribution Productivity Promotion Center of China Commerce, said that seeking milk sources overseas is an inevitable move for companies in the sector as a milk source shortage will be a major problem for Chinese milk producers in the near future.

"The cost of raising cows is rising due to increased epidemic-prevention measures and more expensive animal feed, especially in 2011 and 2012. The risks increased and the profit margins are decreasing," he said.

Milk companies are already suffering from a shortage of milk sources, which started at the beginning of the year, forcing the firms to raise the price of their products.

Mengniu, for instance, has recently raised the price of its products by 4.9 percent on average.
The company said in a recent statement that it was forced to raise the prices because the cost of milk supplies increased by about 12 percent, and in some areas 18 percent, since the beginning of the year.

Song said the recent price surge in milk supplies was due to the fact that too many dairy farmers are abandoning the supply chain. He added that milk companies will inevitably have to seek milk alternative supply sources overseas.

"The speed at which milk companies are building their own dairy farms is far behind the rate at which farmers are pulling out from the industry," Song said.