Cargill may have broken law over Colombia land buying: Oxfam 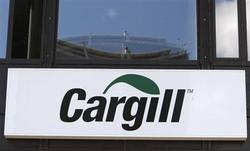 Cargill bought a large area of farming land in Colombia many times bigger than the legal limit by setting up dozens of "shell companies", violating the spirit of agrarian reform laws, Oxfam said in a http://www.oxfam.org/es/grow/node/33456">report. (Photo: Reuters)

Cargill may have broken law over Colombia land buying: Oxfam

Read the Oxfam report: “Divide and Purchase”: how land ownership is being concentrated in Colombia


“Divide and Purchase”: how land ownership is being concentrated in Colombia - See more at: http://www.oxfam.org/es/grow/node/33456#sthash.fiOacf5Z.dpuf
(Reuters) - U.S. commodities trader Cargill bought a large area of farming land in Colombia many times bigger than the legal limit by setting up dozens of "shell companies", violating the spirit of agrarian reform laws, charity Oxfam said in a http://www.oxfam.org/es/grow/node/33456">report Friday.

In the research report "Divide and Purchase," Oxfam says Cargill set up the companies to buy land up to the legal limit for any individual or company, to farm all of the adjoining land as a single plantation and get around restrictions designed to promote distribution of land to smallholder farmers.

Oxfam says that Cargill's purchase of at least 52,576 hectares (130,000 acres) in the eastern Altillanura plains through companies registered from 2010 and 2012, all listing the same agricultural activity and address, may have broken the law.

"The company violated the spirit of the law by accumulating an area at least 30 times greater than the permitted limit," Oxfam said in its report which also listed other lesser known local and foreign companies it said also circumvented land laws.

Cargill spokeswoman Lori Johnson told Reuters the land in question was "not suitable for growing crops on any scale without significant investment," for example to correct acidic soils and build infrastructure to transport crops.

"Where we disagree with Oxfam is on what are the policies that really lead to stability, poverty reduction and increased food security. And, in this particular instance we clearly disagree with their interpretation of the law," Johnson said.

Colombia has one of the highest rates of land concentration in the world, Oxfam says, with 80 percent of the land owned by 14 percent of landowners. Legal limits on land purchases including in the Altillanura plains, are a key part of Colombia's land-reform effort.

Individuals and companies are only able to buy much smaller areas of land between 36 and 1,725 hectares (89 and 4,262 acres) in the region, Oxfam said.

Access to land was one of the issues that spawned a bloody and on-going five-decade conflict in which rebels, the FARC and smaller guerrilla group, the ELN, have been trying to topple the government.

Agrarian reform is a hot political issue and was the first issue to be tackled at peace talks taking place in Cuba between the government and the main guerrilla group, the Revolutionary Armed Forces of Colombia, better known as the FARC.

The report says Cargill was assisted in the purchases by law firm Brigard and Urrutia. A former Colombia ambassador to the United States, Carlos Urrutia, was a senior partner in the firm at the time of Cargill's purchases. He resigned from his diplomatic post in July when stories of the land buying first emerged, Oxfam said.

Oxfam says the actions of Cargill and other companies threaten to derail efforts to help small farmers and erode efforts to address social inequality, an issue that features on the agenda of peace talks between the government and FARC.

Regardless of whether Cargill broke the law in Colombia, the government is trying to encourage investment by agricultural firms whose know-how and capital it says can develop terrain largely hostile to farming.

Oxfam in turn argues that the government should invest in infrastructure in order to make smallholder farming viable there and to improve livelihoods of rural dwellers. That would also ensure production of locally consumed staples rather than encouraging "monoculture," or production of single crops like soy, for export markets, Oxfam says.