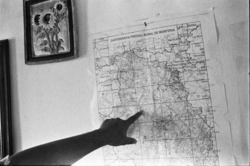 (Bogotá) – Internally displaced Colombians face killings and widespread death threats for attempting to reclaim their land, Human Rights Watch said in a report released today. Abuses targeting displaced families for trying to return home almost always go unpunished, as do the original crimes of forcing them off their land and stealing it.

The 184-page report, “The Risk of Returning Home: Violence and Threats against Displaced People Reclaiming Land in Colombia,” documents killings, death threats, and new incidents of forced displacement committed against displaced Colombians in relation to their efforts to recover their land. Many of those targeted are reclaiming property through the Victims Law, which was enacted by President Juan Manuel Santos in 2011 to restore millions of hectares of stolen and abandoned land to displaced people.

“President Santos is making a serious and unprecedented effort to return land, but violence and intimidation against displaced families attempting to return home threaten to sabotage his banner human rights initiative,” said José Miguel Vivanco, Americas director at Human Rights Watch. “Unless Colombia starts to ensure justice for abuses against land claimants, they will continue to be killed, threatened, and displaced for seeking to reclaim what’s theirs.”

Since 1985, abuses and violence associated with Colombia’s internal armed conflict have driven more than 4.8 million Colombians from their homes, generating the world’s largest population of internally displaced people. Displaced Colombians are estimated to have left behind 6 million hectares of land, much of which armed groups, their allies, and others seized and still hold.

Human Rights Watch conducted a year and a half of field research, including interviews with more than 250 land restitution claimants and public officials. Researchers documented abuses involving victims attempting to reclaim farms through the Victims Law – and other land restitution mechanisms – from the states of Antioquia, Bolívar, Cesar, Chocó, Córdoba, La Guajira, Sucre, and Tolima, as well as Bogotá.

Human Rights Watch documented 17 cases of killings of displaced land claimants and leaders since 2008, in which 21 people died, in circumstances that provide compelling evidence the attacks were motivated by the victims’ activism.

Human Rights Watch also documented more than 80 cases in which victims had received serious threats, as well as over 30 cases of new displacement in which restitution claimants fled their homes yet again because of abuses related to their efforts to reclaim land, or similar activism.

Official data obtained through information requests shows that these documented cases of killings, threats, and renewed displacement are part of a wider pattern. As of August 2013, the Attorney General’s Office reported that it was investigating 49 cases of killings of “leaders, claimants, or participants in land restitution matters” committed in half of Colombia’s 32 states since 2000. In these reported cases, 56 people were murdered.

Moreover, justice authorities have rarely prosecuted the people who originally displaced claimants and stole their land.

The lack of justice for forced displacement and land theft means that those most interested in retaining control of the wrongfully acquired land often remain off the radar of authorities and readily able to violently thwart the return of the original occupants, Human Rights Watch said.

In addition, third parties who took over lands after original occupants were forced out – sometimes in collusion with paramilitaries – as well as left-wing Revolutionary Armed Forces of Colombia (FARC) guerrillas, have also targeted claimants and leaders who tried to get their land back.

The government’s protection program, which is unparalleled in the region, has provided hundreds of at-risk land claimants and leaders with protection measures, such as bulletproof vests and bodyguards. While helpful, these are essentially palliative measures, since they do not rein in or hold accountable the armed groups, criminal mafias, and others who are threatening claimants’ lives, Human Rights Watch said.

The limitations of the government’s protection program are evidenced by the fact that it often relocates threatened land claimants because authorities cannot guarantee their safety where they live. Since January 2012, the program has temporarily relocated more than 90 land claimants and leaders to new areas due to serious threats against them.

As of June 2013, the Restitution Unit, charged with implementing the Victims Law, had obtained rulings ordering restitution for 1 percent of the more than 43,000 land claims it had received. By July, just one family had returned to live on their land as a result of rulings under the Victims Law and with the support of the government office coordinating displaced people’s return home, though many of the rulings’ beneficiaries were visiting their land to use it for farming.

If Colombia does not take further action to stop the abuses, the problem is likely to get much worse, Human Rights Watch said. The level of threats and violence will almost certainly increase as the thousands of pending land claims progress, families start returning home, and those intent on keeping wrongfully acquired land see their interests more directly affected.

Prosecutors should work with land restitution authorities to vigorously pursue crimes against displaced land claimants in areas where restitution is being carried out. They should coordinate their efforts to take advantage of the concentration of complaints concerning related cases. That will allow justice authorities to carry out systematic investigations of forced displacement, land takeovers, threats, killings, and other abuses against displaced people seeking to reclaim land.

“In Colombia, trying to get your land back often means assuming risk and living in fear, whereas there is virtually never a cost for those who force farmers off their land, steal it, and attack them for attempting to reclaim it,” Vivanco said. “Bulletproof vests and bodyguards won’t solve the problem. Meaningful protection will require holding the attackers accountable, and breaking the grip paramilitary mafias still have in areas where displaced families are trying to return.”