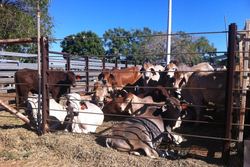 Indonesia has moved to solve its beef supply problems by approving a plan to buy one million hectares of Australian farmland, a plot four times the size of the ACT.

Beef prices in Indonesia have hit record prices over the past year as local production fails to keep pace with domestic demand.

The country's so-called self-sufficiency policy has been blamed because it restricted imports from Australia and elsewhere.

To lower prices Indonesia has eased some restrictions until the end of 2013, but the government has now come up with a more permanent solution.

The state enterprises minister, Dahlan Iskan, told journalists that cabinet has approved the purchase of a million hectares of land in Australia so Indonesia can breed its own cattle on the land.

Local media are quoting him as saying that cattle would be bred in Australia and brought to Indonesian feedlots.

"Breeding cattle in Australia is cheaper, [but] feedlots in Indonesia are three times cheaper [than Australia]," Mr Iskan said.

That means young cattle would be raised on an Australian property and taken to Indonesia to be fed until they are ready for market.

The Australian cattle station would be run, or at least overseen, by one of Indonesia's state-owned enterprises such as Rajawali Nusantra Indonesia, or RNI.

The minister says RNI already has a history of selling boxed beef, but it also has interests in other business areas, such as medical supplies.

Once the Indonesians decide on an appropriate piece of land, Australia's Foreign Investment Review Board would have to rule on whether a sale could go ahead.

Indonesia has put pressure on itself to stick to its self-sufficiency policy, even though it has been blamed for driving up food prices and will not meet its target.

In response to the price hikes, particularly for beef, the government has been continually "borrowing" from the next quarter's import quotas.

The effect is a short-term increase in beef supply as an emergency measure, but the government refuses to describe it that way because it would be an acknowledgement of the self-sufficiency policy failing.

Instead it says the quotas are being "brought forward".

But Indonesia risks getting stuck in a situation where it is reacting to market pressures and has to keep borrowing from the next tranche of quotas.

As a result the purchase of Australian land would allow Indonesia to say it is still achieving self-sufficiency by providing its own beef, even though it is grown offshore.

While Australian cattle farmers would argue there is a potential supply of Australian cattle that could be used to meet demand by lifting quotas permanently, that would also have the Indonesian government "losing face" by seeming to back down on the policy.