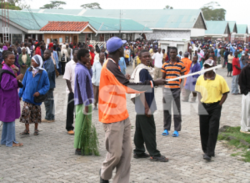 The Karuturi Farm directors who had flown in to Kenya from India kept off the venue of the meeting due to the anger of union officials and the farm workers.

A meeting called to address the problems facing Karuturi flower farm was cancelled. The farms directors who had flown from India kept off the venue of the meeting to the anger of union officials and the farm workers.

This came as the working and living conditions in the farm continued to deteriorate with the more than 3,000 workers living without electricity and water.

Kenya Plantation and Agricultural Workers Union Naivasha branch secretary Ferdinand Juma the secretary said the directors pulled out of the meeting without giving an explanation. Juma said they were to talk to the the workers about the financial crisis in the flower farm that produces one million roses per day.

“The directors were around at the weekend and we were surprised when a meeting called to address the pending issues was called off at the last minute,” he said. He said the workers' August salary is a major concern as the farm had just cleared paying the July wages.

“All is not well in the farm as electricity and water have been disconnected and the owners are not coming clean on what is going on,” he said. He said that the move to disconnect power has affected operations in Karuturi hospital which serves over 25,000 people per month.